5 Super Eagles stars who need to shine against Serbia 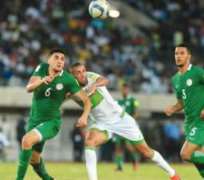 Ahead of Tuesday's friendly against Serbia, Completesportsnigeria.com's ADEBOYE AMOSU lists five Super Eagles players who need a big performance to redeem themselves and cement their spots in the squad for Russia 2018 after below-par showings against Poland…

LEON BALOGUN
Hailed for his formidable partnership with William Troost-Ekong during the qualifiers, the Mainz of Germany centre-back has struggled to impress in the  Super Eagles' last two games.

No wonder he was hauled off in the 4-2 friendly win against Argentina last November and the situation repeated itself on Friday with Kenneth Omeruo replacing him after another below-par outing.

With the likes of Chidozie Awaziem, Stephen Eze and Omeruo knocking on the door and hoping to secure starting berths ahead of the World Cup, Tuesday's game against Serbia offers the towering defender a big chance to redeem himself and secure his place in the team.

BRYAN IDOWU
The Amkar Perm of Russia left-back had a memorable debut, scoring Nigeria's third goal in the 4-2 win against Argentina last November. He was praised for his all-round display in the game and touted as possible replacement for regular left-back Elderson Echiejile.

Idowu however failed to live up to the high ratings against Poland and was way off the high standards he set in his previous outing and also at club level.

It is difficult to see him start  against Serbia with Ola Aina and Echiejile also fighting for the same position.

Should he get the nod ahead of the duo again, Idowu will need to better his performance against Poland to prove he is the right man for the position.

JOEL OBI
Plagued by injuries in recent years, the Torino of Italy midfielder was handed the chance to stake a claim for a place in the team ahead of the mundial against the Poles.

Though he didn't do his chances any harm following a battling display in the middle of the park, with the likes of Mikel Obi, Wilfred Ndidi, Oghenekaro Etebo and Mikel Agu ahead of him in the pecking order, Joel could make do with another chance and a top-notch display to prove he is worthy of a place in the World Cup squad.

TYRONNE EBUEHI
Still considered as second choice to Shehu Abdullahi, the ADO Den Haag right-back showed his class when he was  introduced after break in the friendly win against Argentina in what was his debut game for the Super Eagles.

He was decent too after replacing the same player against Poland, but he will need to offer more to displace Shehu from the spot.

He might get the chance to finally prove his worth against Serbia on Tuesday with Shehu Abdullahi looking doubtful for the game after picking up an injury against Poland.

KELECHI IHEANACHO
An inconsistent performer on the international scene, Kelechi Iheanacho despite his quality and versatility has not consistently proved he is worthy of a regular berth in the team.

He was poor against Poland on Friday and might need to take his chance against Serbia if at all he gets to feature in the game to show he is still a force to reckon with in the team (Complete Sports).