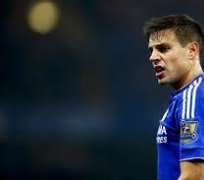 In much-quoted comments on Sunday, journalist Gabriele Marcotti told Sky News that Antonio's Conte's reputation for wearing his players out has followed him from Juventus to Chelsea (as has his fractiousness over transfer spending).

Few(er) people cared about that “reputation” last season when Conte rarely rotated, the players were almost never injured, and Chelsea won the title at a nice and steady one-match-a-week pace. Given this season's busier schedule, poorer results, and more frequent injuries, these criticisms have been given a new lease on life.

Some of that is on Conte (lack of rotation or poor use of rotation), some of that is circumstantial (almost every player has taken an extended turn in the treatment room this season). Either way, at this point of the season, after several months of no-break football, the players are exhausted. For many of them, this international break comes as a welcome relief, even if they were called up (it's only friendlies, after all).

Here are the five Chelsea men who were probably happiest when the calendar rolled over to FIFA. Photo by Catherine Ivill/Getty Images

Cesc Fabregas
He's 30 years old, was never fast and is even slower now, but he's been asked to carry a huge load in midfield this season. With Danny Drinkwater and Tiémoué Bakayoko both missing extensive time and even Kanté out for six games with a hamstring injury, aging Cesc is being asked to become a twice-a-week player once again. Last season, his entire Premier League campaign amounted to 1327 minutes on the pitch. This season he's already logged almost 500 minutes more and there are still eight games left to play. Overlooked by Spain, small wonder he made a beeline for Dubai after the Leicester match.

Andreas Christensen
We don't have to guess about this one. His Denmark national team coach sent him home on Thursday with “fatigue”. At just 21, Christensen's body is still adapting to the demands of the physical Premier League. With David Luiz out, he, too, has been playing twice a week. He's logging more games than he's ever played in his young career and unlike his last two seasons in Germany, he hasn't had a winter break to recuperate. His tired body and brain must have welcomed the break like manna from heaven.

César Azpilicueta
This one is on Conte. Azpi is such a mainstay of the back three that Conte simply doesn't want to rest him. As a result, he's played 300 more minutes (3825) in all competitions than the next most utilized player on the team, the first-choice goalkeeper (3510). Azpilicueta may be indestructible (he played every single minute of every single league game last season), but even he needs to rest sometime. So while he was selected for Spain, I'm rather relieved he sat on the bench for the entire 1-1 draw between Spain and Germany. It may not be what he would have preferred, but it's probably for the best. It's not the same as a beach in Dubai, but it's not the war zone of the Premier League either. Photo by Clive Rose/Getty Images

N'Golo Kanté
If he's healthy, he's playing. That's just the way it is. He's fourth in minutes for Chelsea, despite being sidelined for six games by a hamstring injury he picked up in October (on international duty, ironically enough). I regret to report that Kanté played the entire 90 minutes of France's 2-3 loss to Colombia. Maybe he'll be allowed to rest his weary bones against Russia on Tuesday.

Marcos Alonso
Well, the problem is pretty obvious. Until Chelsea bought Emerson Palmieri in January, Alonso was the Lone Ranger on our left flank. Conte had no faith in converted winger Kenedy and simply pushed Alonso out there, rain or shine. That's why he's third on the club in minutes played. It's amazing he hasn't shown more fatigue. Tired or not, he was delighted when Julen Lopetegui added him to the Spain squad for the first time in his career. No doubt he was disappointed to be glued to the bench for Friday's tilt against Germany, but we weren't. No offense, Marcos, but here's hoping the same happens Tuesday against Argentina. We need you fresh for Tottenham.

So that's your Weary Five. Two midfielders and three defenders who have been doing yeoman's work for the cause. Of all them, the ones who worried me most were Cesc, because of his age, and Christensen, who was starting to make expensive mistakes. With luck they'll come back next Sunday feeling a little fresher and a little sharper, ready to propel Chelsea back into the top four and exact a little Wembley revenge too.