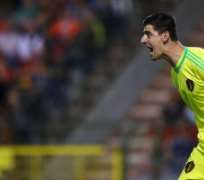 Wouldn’t be an international break without any injury scares occurring to one of our players, ey?

As announced by Belgium national team manager Roberto Martínez, Chelsea’s Thibaut Courtois has left the Belgium team camp and returned to Cobham due to an ongoing issue concerning an injury. Thankfully, it doesn’t seem as if there’s too much cause for concern here as the Belgian is nevertheless expected to start for the Blues’ in our vital home clash against Tottenham next Sunday.

“Thibaut Courtois, from a coaching perspective, will not be fit for Tuesday but could be okay to play at the weekend [against Tottenham] for his club. For Tuesday it is too early and a risk.”

“We are not going to take any chances with anyone. The medical team felt he [Courtois] would not be 100 per cent for Tuesday.”

-Roberto Martínez; Source: Sky Sports
Unlike most other national teams, Belgium didn’t play on Friday and Courtois will most presumably still be suffering from the niggling injury which had already kept him out of the FA Cup quarterfinal game against Leicester City last week. On a side note, Liverpool’s Simon Mignolet will instead be playing for the Belgians… Good luck with that.

Photo by Dean Mouhtaropoulos/Getty Images
The question that consequently arises is why Martínez called on the Chelsea goalkeeper in the first place as it seems to have been pretty obvious that Courtois wasn’t fit enough to play. Everyone was apparently hoping that the player would simply recover in time for a meaningless friendly and were seriously considering to take an unnecessarily poor risk. I mean, it’s good to hear that Belgium’s medical team was capable enough to ultimately make the correct call; however, I’m quite sure that this is something that Chelsea’s medical staff will have been telling them right from the start, hence making this a pretty silly move from Martínez. Can’t say I’m surprised, though.