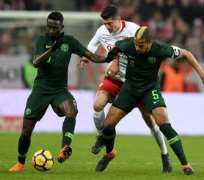 Nigeria's Super Eagles began preparation for Russia 2018 with a lone goal victory over the Polish national team in Poland in an international friendly.

A 61st minute penalty converted by Chelsea's sensation, Victor Moses was all that the Super Eagles needed to beat Poland.

After a brilliant run into the 18-yard box, Moses was hacked down by a polish player, as the referee pointed to the penalty spot.

The Eagles winger was very confident of himself as he casually kicked the ball to the left side, while the Polish keeper, Fabianski went the other way.

Polish superstar, Robert Lewandowski was frustrated by Nigerian solid defenders, who ensured that he scored no goal in the match before he was later substituted.

Poland mounted pressure on the Nigerian defence, but the brilliancy of the defenders and keeper Uzoho ensured that the Eagles emerged victory.