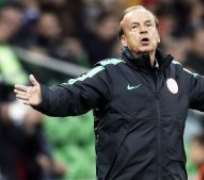 Gernot Rohr is hopeful that Nigeria’s senior players will step up in the absence of John Obi Mikel, who’s missing for the Super Eagles’ international friendly against Poland on Friday.

The West Africans’ captain is the only active Nigerian player to have won the Champions League, and boasts the kind of experience that is unparalleled elsewhere in the squad, having lifted the African Cup of Nations in 2013 and spent over a decade with Chelsea.

Work permit problems with leaving and returning to China, where Mikel currently plays his football with Tianjin TEDA, have ruled the 30-year-old out of Friday’s friendly in Wroclaw, and Rohr has called on his team to find an answer to the midfielder’s absence.

“John Obi Mikel is our uncontested leader but it will be interesting to see how the other players can do without him,” Rohr told journalists in his pre-match press conference [ as per Goal ]. “Unfortunately he had this problem with his work permit in China which means he couldn’t go out and come back, so it was a problem.

“We are playing like a team and we have other players who can take responsibilities,” the German tactician continued.

“We have a second captain, we have a third captain we have a fourth captain so I think the team will be able to give a good answer,” he concluded. “We have a team but we need a leader.”

With Oghenekaro Etebo also absent, John Ogu is one contender to step into Mikel’s shoes, having come into his own towards the end of the qualifying campaign.

However, perhaps a move like-for-like replacement for Eagles metronome Mikel would be his namesake Joel Obi.

The 26-year-old has endured a stop-start international career due to injury, only showing glimpses of the talent that once saw him heralded alongside Mikel as a youngster.

Now fit again, and enjoying a fine campaign in Serie A with Torino, Obi may have done enough to convince Rohr that he’s ready to step back into the Super Eagles team and play a key role as the West Africans approach the World Cup.

Nigeria kick off their campaign in Russia with a meeting against Croatia in Kaliningrad on June 16. They then face Iceland in Volgograd on June 22, before closing off their group-stage campaign against Argentina in Saint Petersburg four days later.