Poland Coach - Why We Want To Play Nigeria 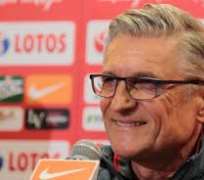 Poland assistant coach, Hubert Malowiejski has revealed that the coaching crew decided to play against Nigeria due to their style of play which is similar to the Senegalese team.

Senegal, Colombia, Japan, and Poland have been paired together in group H.

Poland will host Nigeria at the Municipal Stadium, Wroclaw on Friday in a bid to prepare for their World Cup match against Senegal in Russia.

Hubert said that the Super Eagles are strong and they have the same tactical style as the Senegalese national team.

“Everyone is looking for strong rivals, because those are the teams that we will meet at the World Cup,” Malowiejski told www.laczynapilka.pl .

“Secondly, they (Nigeria) play almost the same style with Senegal, one of our group opponents in Russia.

“Nigeria is a strong team, from the African continent and is a team with players who have

“There are differences in the set-up of both teams but we will look at the details first.

” The opponent is a necessary condition to draw conclusions for the World Cup. The foreground is always our team, our assumptions to be implemented.

“If there are few players missing in the Nigeria team nothing will happen, but that does not change anything in our preparations.”

Mikel Obi, Oghenekaro Etebo have been ruled out of the match due to visa hitches and injury respectively.