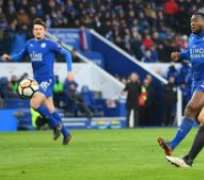 Pedro came off the bench to grab an extra-time winner and send Chelsea through to the FA Cup semi-finals with a 2-1 win at Leicester City.

The former Barcelona winger capitalised on some poor goalkeeping from Kasper Schmeichel to nod home N’Golo Kante’s cross in the 105th minute and end the Foxes’ hopes of a place at Wembley.

Earlier, Jamie Vardy’s second-half equaliser had cancelled out Alvaro Morata’s first goal since Boxing Day to send an entertaining tie beyond the 90 minutes.

Although Chelsea boss Antonio Conte said beforehand the FA Cup was “not important” to him on a personal level, it now represents the best chance of silverware for the soon-to-be dethroned Premier League champions and his strong starting XI reflected that.

Despite that it was Leicester who started the better, Marc Albrighton firing Danny Simpson's right-wing cross narrowly past the right-hand post.

But Chelsea gradually found a foothold, thanks largely to Kante's intelligent promptings against his former club while wing-backs Victor Moses and Marcos Alonso were finding plenty of space down the flanks.

Wilfred Ndidi forced Willy Caballero into a fine save down to his right after 20 minutes but the visitors looked the more assured in possession.

Morata had already fired straight at Schmeichel from the edge of the box before he finally ended his goal drought three minutes before the break.

Willian led a swift counter attack before slipping a delightful through ball to the former Juventus man and he showed a cool head to clip past Schmeichel and into the net.

Leicester came out strongly after the break and Riyad Mahrez could have levelled within two minutes, his 45-yard attempt following a poor clearance from Caballero drifting wide of goal.

Vardy then skewed a header off-target when completely unmarked eight yards out but he was not to be denied with 15 minutes to go.

Mahrez was the architect with a run and cross down the right flank that caused chaos inside Chelsea’s six-yard box. Vardy and Vicente Iborra saw shots blocked before the latter forced another effort on goal. Caballero made a smart save low to his left but the loose ball fell nicely for Vardy to power into the net.

Both sides went for a winner in the final 10 minutes – Morata backheeling against the post from a Cesc Fabregas cross, although the offside flag was up, and Vardy firing low at Caballero before Schmeichel was quickly off his line to deny Morata.

The extra period started slowly and it came as a surprise when Chelsea went back in front. Kante’s cross into the box did not look overly threatening but Schmeichel’s decision to charge off his line proved foolhardy as Pedro simply nodded over him and into the empty net.

Leicester pushed for a second leveller – Moses producing a sensational block to thwart Fousseni Diabate – while, at the other end, Albrighton denied Kante in similar circumstances.

FA CUP semi-final draw
All four of Manchester United, Tottenham Hotspur, Chelsea and Southampton have one final chance to win a trophy this season: the FA Cup.

Man United and Tottenham reached the semifinals with wins on Saturday, followed by Chelsea and Saints on Sunday.

The semifinals draw, which was held immediately after Chelsea's extra-time victory over Leicester City on Sunday, has pitted Man United against Tottenham with Spurs the de facto away side in their temporary home at Wembley Stadium. The two sides are currently separated by just four points (with eight games to go) in the race for second in the Premier League.

In the other semifinal, it'll be Southampton versus Chelsea. The Blues made it all the way to the final last season before losing out to Arsenal. Similarly, Saints lost last season's League Cup final, to Man United.

The games will be played on Saturday, April 21, and Sunday, April 22.