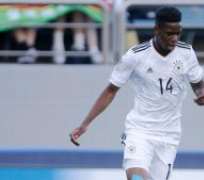 Hertha Berlin centre-back Jordan Torunarigha has been offered a ticket to the 2018 World Cup by Nigeria, which would allow the Germany under-21 international to represent the same country as his father.

The Bundesliga player could switch allegiances and play for the Super Eagles, which his father, Ojokojo Torunarigha, won 12 caps for in the 1990s.

Eligible to play for both Nigeria and Germany, the Nigerian FA have now offered the centre-back a ticket to the 2018 World Cup, his agent, Thomas Zorn, has confirmed to B.Z .

“That’s true. We have such a request from the NFF,” Zorn said, and the paper added that Nigeria coach Gernot Rohr has tried for several months now to win over the centre-back.

“Jordan must listen to his heart,” Zorn said. “This request is a huge honour, and also a confirmation for his great development. But I think his journey for the German FA is not over.”

Hertha coach Pal Dardai, 42, said that while “the World Cup is a huge chance for him, it might be better for his development if he first plays for Germany’s U21.”

“Maybe, he can even play for Germany one day,” he said.

Coming through the ranks of Hertha’s academy, Torunarigha has played for Germany’s youth teams since late 2014, and since debuting for Berlin’s pro team in February 2017 has made 21 appearances for the club in Bundesliga and Europa League competition.

Torunarigha has been selected for Germany’s upcoming U21 European Championship qualifiers against Israel and Kosovo.