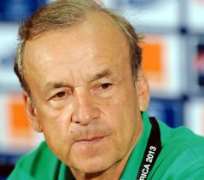 Nigeria coach Gernot Rohr believes that it was a ‘logical’ decision to leave Dele Ajiboye out of his latest Super Eagles squad despite his heroics during the African Nations Championship.

Goalkeeper remains a problem position for the national side following the retirement of Vincent Enyeama and Carl Ikeme’s leukaemia diagnosis .

However, despite demonstrating his quality with a heroic display during the Super Eagles’ 1-0 CHAN semi-final victory over Sudan, Ajiboye was overlooked for Nigeria’s squad ahead of their upcoming friendlies against Poland and Serbia.

“They had already their chance,” began Rohr [ as per Goal ] when asked about Ajiboye and Dele Alampasu’s non-inclusion in the latest Eagles squad. “Remember that we have invited Dele.

“Dele was second choice in the CHAN team, and it’d be surprising that he was No. 1 and [Ikechukwu] Ezenwa No. 2 in the Super Eagles.

“We must be logical in our choices.”
Plateau United’s Ajiboye came off the bench to replace injured captain Ezenwa early into the Eagles’ semi-final against the Falcons of Jeddiane, and ensured it was the West Africans who met Morocco in the final after a series of outstanding blocks.

Alampasu had been another contender to come into the team, but his inactivity looks likely to cost him a World Cup berth. The keeper hasn’t featured for Feirense this term, and hasn’t played a competitive match since April 2017.

With Ajiboye and Alampasu overlooked, Ezenwa appears favourite to start between the sticks at the World Cup, with Daniel Akpeyi and wonderkid Francis Uzoho his primary rivals.

“Uzoho made his debut for Nigeria against Argentina and did very well,” the coach continued. “He plays for the second team of [Deportivo] La Coruna; we could see him [at the World Cup].

“Ezenwa was injured but he is returning gradually and he’s played with the second team at his club already,” Rohr concluded. “We’ll see who will be the fittest.

“I think Uzoho, who did so well in the second half against Argentina, could add some more competition for us.”

The Super Eagles have been pitted against Argentina, Croatia and Iceland in their World Cup group.