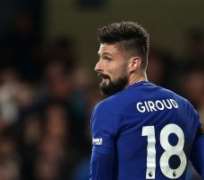 Chelsea striker Olivier Giroud believes that his improved link-up play with midfielders Eden Hazard and Willian are signs that he is adapting to life at Stamford Bridge, the Frenchman said.

Former Arsenal player Giroud, 31, made his second start for Chelsea since his January transfer in Saturday’s 2-1 Premier League victory over Crystal Palace. He was unlucky not to open his league account, hitting the post in the second half.

“I’m adapting well, I try to have a good understanding on the pitch with the number 10s like Eden and Willian,” Giroud told the club’s website (www.chelseafc.com).

“It’s important keep the confidence high and work for your team mates so I tried to deliver some passes for Willian and Eden. I’m happy because we won and even if I didn’t score I’m sure I will in the next games.”

With striker Alvaro Morata struggling for form and fitness in the second half of the campaign, Chelsea have turned to Willian to provide the threat in front of goal.

The Brazilian has scored five times in the last five matches in all competitions, including Chelsea’s opener at Palace.

“He’s been very efficient in the last weeks, he’s doing very well and he’s on a good run,” Giroud added.

“We need players who can make the difference all through the game. He’s got everything to bring his quality for the team.”

Chelsea, who are fifth in the league with 56 points, turn their attention to the Champions League where they face Barcelona in the second leg of their last 16 match on Wednesday.

Playmaker Willian scored in the first leg at Stamford Bridge before his goal was cancelled out by striker Lionel Messi.