Arsenal 3-0 Watford: Mustafi, Aubameyang and Mkhitayan all score for Gunners 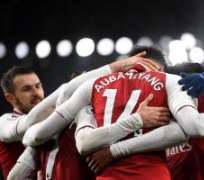 Arsenal saw off Watford to secure their first Premier League win in four games and continue their recovery from a disastrous run of results.

Despite returning to winning ways at AC Milan on Thursday night, Arsene Wenger’s side were without a Premier League victory since February 3 as they welcomed the Hornets to the Emirates Stadium, with pressure mounting on the Frenchman.

But goals from Shkodran Mustafi, Pierre-Emerick Aubameyang and Henrikh Mkhitaryan were enough to secure a fairly comfortable 3-0 win over Watford, who had a second-half Troy Deeney penalty saved by Petr Cech.

It was the first time the 35-year-old has kept out a spot-kick since joining Arsenal in 2015 and helped him secure a landmark 200th Premier League clean sheet.

The hosts would take the lead from the next attack, Mustafi rising between Adrian Mariappa and Jose Holebas to head home Ozil’s free-kick.

Cech, without a league clean sheet since December 16, did well to prevent Abdoulaye Doucoure sweeping home a quick reply.

Aubameyang was then inches away from doubling Arsenal’s lead but could not make meaningful contact as he slid in to meet Sead Kolasinac’s low cross.

Watford should have been level as Cech pushed Richarlison’s free-kick straight back into play only for Roberto Pereyra to blaze wildly over.

Ozil then missed a great chance at the other end as he was played in by the impressive Elneny but saw his close-range effort kept out by an alert Karnezis.

Watford had further chances to go in level at the interval as Rob Holding turned a clearance just over his crossbar before Cech was again forced into action to turn a Richarlison header behind.

The visitors had the better of the early exchanges of the second-half, only to fall further behind as Mkhitaryan slid in Aubameyang, who rounded Karnezis to slot home.

The two-goal lead came under immediate threat as Ainsley Maitland-Niles tripped Pereyra with referee Martin Atkinson awarding Watford a penalty, with Deeney’s effort saved by Cech this time around.

Arsenal should have been handed a penalty of their own as Mariappa caught Mkhitaryan with a late challenge inside the box, this time Atkinson gave nothing.

But the Armenia international, who opened his Arsenal account in Milan, added the third courtesy of Aubameyang’s pass with substitute Danny Welbeck coming close to grabbing a fourth late on.

There was to be no late dramas for Wenger and his players to contend with as they now look forward to completing the job against Milan on Thursday and progressing into the last eight of the Europa League.