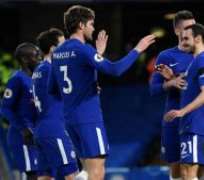 Chelsea claimed three points after a turbulent week, but their performance still left something to be desired as  Crystal Palace  nearly clawed their way back into the match with a display of fighting spirit.

Two goals in a dominant first half, both of which interacted with the body of Martin Kelly on their way in, provided  Chelsea  with a platform for victory. But the introduction of Wilfried Zaha at half-time gave the visitors renewed heart and Patrick van Aanholt pulled a goal back in the 90th minute to test the nerves of Stamford Bridge unduly.

Antonio Conte was a manager under pressure before this match, as much because of his perceived pessimism over his team's prospects as their results. Results have not been good, with only four victories from 18 competitive games in 2018, but as much as anything Chelsea needed to show some passion and endeavour in their play.

To that end Conte will have been grateful to recall N'Golo Kanté, missing from defeat at Manchester City last week after fainting during a training session. The Frenchman returned to the heart of the home midfield and was as busy as ever, setting the high tempo that Chelsea needed.

Davide Zappacosta and Olivier Giroud were also brought into the side, and each helped in their own way too. Giroud offered a focal point but also a poaching instinct, and might have turned a Kanté shot past Wayne Hennessey in the eighth minute had his foot been an inch longer.

The opening goal came from a player Conte has sometimes been reluctant to rely upon, but who has proven highly dependable for Chelsea this season. Willian has only completed 90 minutes six times this season and played less than half the matches during Chelsea's downturn since the new year. His 25th minute strike was his fifth in as many games, however, and it was all his own work. Picking up the ball on the left hand touchline, he drifted towards the box, shimmying past two defenders before hitting a low shot with his right foot. His effort took a small deflection off Martin Kelly, hit the inside of the post and went in.

Seven minutes later and the home side had doubled their lead with a goal equal parts beautiful and gormless. It began with Cesc Fàbregas spinning a pass from deep inside his own half to release Marcos Alonso down the left. Alonso crossed to Willian, who dummied for Hazard in the box. The Belgian pushed the ball to his right where Zappacosta was advancing once more. The wing-back's shot beat Hennessey but was blocked by Kelly. Unfortunately for the Palace defender, his clearance was in turn blocked by his goalkeeper's flying frame and bounced backwards, via Kelly's knee, into the net.

Perhaps in an act of karmic rebalancing, Kelly's defensive partner, James Tomkins, denied Giroud a goal on the stroke of half-time with an inadvertant backheel off the line.

For Palace the good news had come before the game, with the return of Mamadou Sakho and, even more importantly, Zaha to their bench. Roy Hodgson threw on Zaha for the second half and his talisman made an immediate impact. Seizing on a miscontrol from Andreas Christensen in the 49th minute, Zaha set Alexander Sørloth clear on goal. The Norwegian striker, a January signing, let off a shot that flew beyond Thibaut Courtois but back off the near post.

Zaha brought an attacking threat to Palace that had been absolutely lacking in the first half. But Chelsea were not about to rest on their laurels and should have increased their lead on the hour mark. Again Willian was the danger, forcing a save from Hennessey with a direct free kick, then – in the same passage of play – producing two crosses that first Zappacosta then Giroud should have turned home. Six minutes later Giroud should have scored again but hit the post from the penalty spot.

Giroud was shortly withdrawn for Alvaro Morata as Chelsea's thoughts began to turn to midweek and Barcelona. Palace took advantage. First Sørloth had a goal chalked off for a foul. Then, on 90 minutes, Van Aanholt tucked home a blind pass from Zaha on the break.