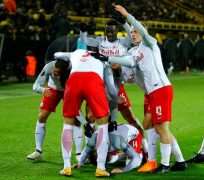 The midfielder struck a superb opener as the two-time Europa League winners put themselves on course for the quarter-finals.

The goal came after he rode a challenge near the halfway line before advancing and, as the Moscow defence backed off, unleashing an unstoppable effort which darted into the top corner.

Diego Costa then added a second two minutes after the break and Koke bagged a late third with Atlético in control.

The Norway midfielder scored twice for the Austrians in the second half, his first a penalty, but Andre Schurrle pulled a goal back to keep the tie alive for Dortmund.

Lazio were held to a 2-2 draw in Rome by Dynamo Kiev, while Marseille will take a 3-1 lead into the second leg against Athletic Bilbao. A late Domenico Criscito goal for Zenit St Petersburg kept the Russian side in the mix, though they were beaten 2-1 in Germany by RB Leipzig, and Sporting will be confident of progressing after beating Plzen 2-0 in Lisbon, Fredy Montero with both goals. (The Guardian, UK)