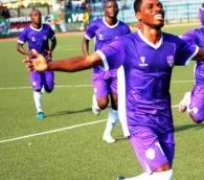 MFM Football Club of Lagos on Wednesday beat visiting MC Alger of Algeria 2-1 in the first leg tie of their CAF Champions League first round pairing.

The News Agency of Nigeria (NAN) reports that Chijioke Akuneto gave the home team the lead in the 36th minute of the game through a well-taken penalty kick.

They however wasted many scoring chances afterwards, missing many chances which could have sealed the game in the first half and seal the fixture altogether.

The second half of the match was however dramatic as MC Alger's Abdul-Aziz Amma restored parity with a cheeky goal in the 49th minute.

Monsuru Bashiru brilliantly lifted over the MC Algers goalkeeper in the 87th minute to score and ensure the win over the visiting team.

Commenting on the match, MFM FC's coach Fidelis Ilechukwu said it was possible for his team to turn things around in Algeria.

“I know that it is going to be difficult in Algiers, but in football everything is possible. We have everything to qualify in Algeria.

“They are a tactical side and we have advantage as well. In Algiers, two things will happen, MFM will go all out against them for a win or we lose and come back here preparing again.

Ilechukwu added that his team was in a process, and he was still not satisfied with the strength of the team.

“I have read a lot of reports in the media about me castigating the team. That is true. When I have the team that I am satisfied with, I will tell the media.

“I need to work on the midfield because our opponents today played a 3-5-2 formation and played on the counter,'' he said.(NAN)