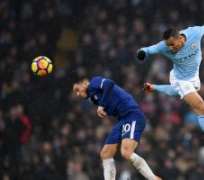 On the surface of it, Chelsea approached Sunday's game similar to how we approached the match against Barcelona the previous week, but not only was the end result not as good, the performance and product on the pitch was nowhere near good enough quality either. It were in fact Chelsea who were completely stifled, finishing with 29 per cent possession and a grand total of zero shots on target.

As against Barcelona and various other times in the past, Eden Hazard played as the center forward, which we know to be not his best position when it comes to influencing the match in an attacking sense. He's not necessarily terrible at it (obviously, as various managers have deployed him there and he himself has said he doesn't mind it), but it doesn't fully utilize all his talents.

Hazard did finish with 32 touches, same as Manchester City forward Sergio Aguero, but for the vast majority of the game he cut an isolated, frustrated figure up top. That frustration spilled over into his post-match comments as well.

”When you leave the pitch you have the impression that you've ran, but that you haven't played a game of football – that's a pity.

“We could have played on for three hours and I wouldn't touch a ball. Only at the end it went better. In the last 10-15 minutes we had more possession but we should have tried to do that all game.”

When talking about these tactics before, Conte talked about the “balance” that it creates in the team — i.e. he's able to deploy both Pedro and Willian as two-way wingers who are arguably required to make this specific gameplan work. But it does mean that others have to step up in an attacking sense. And it also means that you must not concede — as soon as you do, the gameplan is shot and changes are required. So even as Conte's defense of his own tactics is valid, his response to the changing match situation was not quick or good enough.

Not good enough was unfortunately the theme for all involved, as Hazard reflected afterwards. Blame, as ever, can be spread around.

“I think that when we had the ball we should have done better. We made some bad decisions too. There weren't a lot of opportunities. We had a few situations where we could possibly create something but we didn't. If we'd taken these opportunities, we could maybe have scored a goal. But we played against Man City. It's difficult.”

“I don't know [if I'll play center forward again the future]. When the manager plays me up front I try to give everything. But we haven't played a good game and for me personally it's difficult to play a good game when you only touch the ball three times.”

As dour as things seem right now, there are still nine matches to play (27 points on tap), and Chelsea have every chance of finishing in the top four, especially with home games against Spurs and Liverpool coming up. But there is no margin for error. Chelsea have to win out. Based on current form that's a tall order, but as Cesc Fàbregas said after winning the title last season, “football is [FUNNING] unbelievable”.

What also works in Chelsea's favour is that Manchester United, Spurs and Liverpool are all still in the Champions League and look much more likely to progress than Chelsea. United and Spurs are still in the FA Cup as well. Fixture congestion has killed the hopes of many teams before (including Chelsea's own this season, one could argue). No need to lose hope. No need down tools, as the cliche goes.

“It was difficult. Against Barcelona we had at least a few chances. In that game we could have scored. Today we didn't create any. It was complicated. Certainly to find an answer to their pressing. Once we had the ball, we were immediately surrounded by three or four players. We have also wasted some simple passes. We haven't played a good game. We are going to work hard to perform better next week”