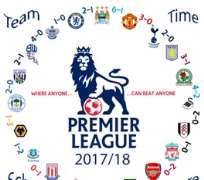 Burnley ended a run of 11 matches without a win by beating Everton 2-1 at the Turf Moor Stadium.

Turkish Striker, Tosun gave Everton the lead in the 20th minute before Barnes restored parity in the 60th minute.

Woods scored the winner in the 80th minute to hand Burnley their first win in 2018.

Burnley had not won in the league since a 1-0 victory over Stoke on 12 December.

Everton have lost their past five Premier League away games and have just one victory in their past 23 on the road (D9 L13).

Leicester City played out a 1-1 draw against Bournemouth at the king power stadium.

Andy King gave the Foxes the lead when he converted from the spot to give Leicester the lead in the 34th minute, Mahrez restored parity in the 96th minute to save Leicester City from Defeat.

Leicester have not won any of their past five Premier League games (D3 L2); their longest run without a win since the final six games of Craig Shakespeare's tenure (D3 L3).

Nigeria Striker, Kelechi Iheanacho could not end his goal drought in the EPL after replacing Adrien Silva on the half hour mark, the Super Eagles star fired blanks.

Swansea moved out of the Relegation zone after spanking West Ham 4-1 at the Liberty Stadium.

King and Jordan Ayew added the other goals before Antonio scored a late consolation for the Hammers.

West Ham have conceded 37 goals away from home in the league so far this season, more than any other side in the competition.

Tottenham Hotspur beat Huddersfield 2-0 to at the Wembley Stadium to maintain their hold on the fourth position courtesy of goals from Son Heung Min, the Korean international opened the scoring in the 27th minute before adding the other goal in the 54th minute to hand Spurs the maximum points.

Mauricio Pochettino became the 19th manager to collect 100 Premier League wins, but the first non-European to do so.

Alan Pardew is under pressure to turn the club fortunes around after losing five matches in a row.

West Brom are rooted in the 20th position 8 points adrift of safety.

Since Pardew took over West Brom have won eight points - the fewest in the league in that time.

West Brom are now on their worst league run since January 2011, when they last lost five in a row.

Southampton played out a 0-0 draw against Stoke City at the St Mary's Stadium.

The Saints have won just once in their last 16 matches and they have failed to win their last 8 matches at the St Mary's Stadium.

Stoke City have failed to find the back of the net in five of their past nine league games, netting just five goals in total in those games.

Salah opened the scoring in the 40th minute before Mane put the icing on the cake in the 58th minute to hand the Reds the maximum points.

Salah has scored in each of his past seven games for Liverpool in all competitions - the last player to do so in more was Daniel Sturridge in February 2014, with eight.

It took 97 games for Liverpool to reach 200 Premier League goals under Klopp - the only managers to have reached 200 goals quicker with their clubs were Manuel Pellegrini at Manchester City (84 games) and Brendan Rodgers at Liverpool (96 games).

Meanwhile Liverpool Coach, Jurgen Klopp has reacted to his team victory that place them second in the EPL before Manchester United play on Sunday.

"I very often forget the result during the game so even though we were 2-0 up I did feel we had to control the game better.

"But then when you step out on the pitch, you realise the wind, so it was difficult to do the right thing in the right moment. We scored two wonderful goals and for sure should have had a penalty but didn't.

"They defended really well and are a good team with quality. We lost a few balls we don't usually lose and Roberto Firmino didn't have much support. It caused a few problems but not too many."

Manchester City will host Chelsea today at the Etihad Stadium while Brighton welcome under fire Arsene Wenger and his boys.