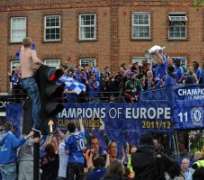 With regards to timings, qualifications and so on
UEFA has made a few minor alterations to its Champions League and Europa League procedures, with Europe’s top leagues now guaranteed at least six spots altogether in these two competitions being the biggest one of them all.

From the 2018-19 season, the top four teams in the Premier League will gain direct qualification to the Champions League group stages, unlike the present system where the top three qualify directly and the fourth team has to go through a round of qualifiers like Liverpool had to, against Hoffenheim, earlier in the season.

This rule also applies to Spain, Germany and Italy. Also, the fifth and sixth teams from these countries will gain direct qualification to the Europa League. This is indeed good for Chelsea, who lie in 5th right now and even if we were to finish 4th, it's good to know we won't have to go through an extra round of qualifies.

There will now be 26 teams automatically qualified as per the access list drawn up from the UEFA association coefficients at the end of 2016/17.

-Source: UEFA
Aside from these changes, the kickoff times have been adjusted as well. Not all games (with the rare far eastern European exception) will kick off at 19:45 GMT. Instead there will be staggered kick offs, 17:55 and 20:00, like they do in Europa League currently. More games on your television means more money for them ( and the teams)!

Important dates for the coming season were also announced, with the Group Stage beginning on the 18th of September, 2018 and the Round of 16 beginning on 12th February, 2019, at the earliest. The Final will be held on the 1st of June, 2019, at Estadio Metropolitano, Madrid.