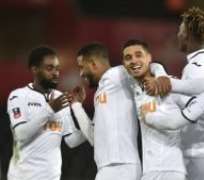 Swansea City beat second-tier Sheffield Wednesday 2-0 in their fifth-round replay to reach the last eight of the FA Cup for the first time in 54 years.

Second-half goals from Jordan Ayew and Nathan Dyer were enough for the hosts.

Swansea had been lifeless in front of a sparse crowd at the Liberty Stadium until Ayew tapped home a rebound from close range in the 55th minute.

Photo: PA
Dyer then settled the contest against his manager Carlos Carvalhal’s former club with 10 minutes remaining, slipping the ball through keeper Cameron Dawson’s legs after being played in by Tammy Abraham.

Swansea last reached the quarter-finals of the competition in 1964, when they were known as Swansea Town.

That year, they went one stage further before losing to Preston North End in the semi-finals.

“1964 is a long time ago, I know because I was born in ’65,” Swansea’s Portuguese manager Carvalhal told the BBC.

“Swansea have now made the best path in the Cup since then so it’s a little part of history and we are happy about that.

“I’m very proud of my players.”
The Swans will play Tottenham Hotspur or Rochdale in the quarter-finals.

Carvalhal would have seen little to be proud of in the first half, however, as Swansea struggled to create chances against their Championship opponents.

Swansea, battling to avoid relegation from the Premier League, dominated the ball but would have fallen behind but for two smart saves in quick succession by Kristoffer Nordfeldt from Wednesday striker Jordan Rhodes.

Their breakthrough arrived on 55 minutes when midfielder Tom Carroll let fly with an unstoppable drive that ricocheted off both posts before halftime substitute Ayew slotted in the rebound.

As Wednesday pushed forward, space opened up for Swansea and Dyer made the game safe on 80 minutes.

“At the break we weren’t happy with the score,” Carvalhal said.

“We needed more energy and intensity, so we brought on Martin Olsson and Jordan Ayew and they had a big impact…

“I think we deserved the win, but Sheffield Wednesday did well in the two games.”