Neymar stretchered off against in PSG-Marseille game 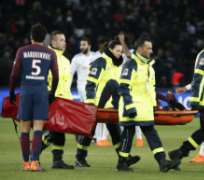 With an important run of fixtures upcoming, including a UEFA Champions League date with Real Madrid, the Parisians received disappointing news on Sunday.

Despite picking up a 3-0 victory against Marseille, Paris Saint-Germain suffered a massive blow in the second stanza after Neymar was stretchered off the pitch with a right leg injury in the 81st minute.

The Brazilian international appeared to twist his ankle upon landing on the ground after going in for a challenge, although there was no contact when the attacker went down in agony.

Minutes after suffering the apparent ankle injury, Neymar was carried off the field on a stretcher by medical staff, raising questions about his availability in the coming weeks.

PSG faces a crucial run of matches, including Wednesday's French Cup match against Marseille and their second leg UCL fixture against Real Madrid.

Unai Emery and his side currently trail 3-1 against Los Blancos, as the tie heads back to Paris for the second meeting.

This season, Neymar has tallied 28 goals in all competitions for the Parisians, including six finishes in the UCL, so his potential absence would be a huge blow to PSG's hopes of advancing to the quarterfinals