Man United to battle Brighton, while Leicester will be home against Chelsea in FA Cup quarterfinals 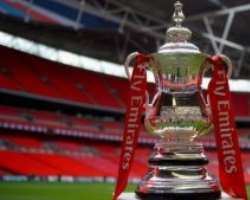 Manchester United were drawn at home to Brighton in an FA Cup quarterfinal draw which saw all the big guns avoid each other on Saturday evening.

Jose Mourinho’s men learned they would face the Seagulls shortly after sealing their place in the last eight with a 2-0 fifth-round win at Huddersfield .

Wigan or Manchester City, who meet on Monday night, will host Southampton, while Chelsea visit Leicester and the winners of Sunday’s Rochdale-Tottenham tie will travel to Sheffield Wednesday or Swansea.

Chelsea and Leicester advanced on Friday night, with respective 4-0 and 1-0 victories over Hull and Sheffield United.

Sheffield Wednesday and Swansea face a replay after their fifth-round clash at Hillsborough ended goalless on Saturday.

Ties to be played March 16-19:
Sheffield Wednesday or Swansea vs. Rochdale or Tottenham

Manchester United vs. Brighton
Leicester vs. Chelsea
Wigan or Manchester City vs. Southampton