The question: Why has Tiemoue Bakayoko become such a liability? 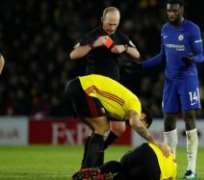 The video evidence of Tiemoue Bakayoko 's struggles at Chelsea have been cruelly strewn across the internet. Where most players are treated to adoring compilations of their greatest goals and skills, many of Bakayoko's YouTube highlights instead focus on his string of misplaced passes and clumsy challenges.

First up, there's the seven-minute package that has been headlined 'Bakayoko – Mistakes Analysis – Chelsea Career So Far'. And then there's another, called 'Fabregas furious at Bakayoko after he fails to control a sublime pass'. At this point, the viewer is directed towards some more suggested viewing, titled 'Chelsea legend Frank Lampard slams Tiemoue Bakayoko'.

Those who have the resources (and, indeed, the time) to edit such clips together would barely have believed their luck as the Frenchman floundered at Vicarage Road . For while Bakayoko has indeed had difficult matches during his first season in English football, none of them can have been quite as disastrous as this.

Bakayoko was so far from being at the races last night that he might as well have been in a different timezone. It started in the fifth minute, when he swept the first of his personal collection of misguided passes straight into the path of a yellow shirt. Not even five minutes had passed before there was another cheap concession of possession on the halfway line.

Watford were suffocating the Chelsea midfield, but Bakayoko, dazed and dizzied, was hardly providing the most sustained resistance to their pressing game. In the opening 30 minutes, he lost the ball no fewer than seven times.

If this was a story with which Chelsea fans have become painfully familiar, then it was about to take a chilling and novel twist. The first booking was foolish enough, as Bakayoko brought Etienne Capoue to the ground with a rugby tackle, and the second was indicative of everything that had gone wrong for him on the night: a heavy touch, followed by a clunky lunge on Richarlison.

Was it a harsh decision? Perhaps. But it was also no less than Bakayoko deserved for what must be 30 of the worst minutes an individual has produced in the Premier League this season.

Credit, of course, must go to Watford and Javi Gracia for identifying and targeting this lack of composure on the ball at the heart of the visiting midfield. They buzzed and harried all over the Chelsea half, pushing as high as possible, as often as possible.

Bakayoko's difficulties in England make for a curious psychological study. What, precisely, makes a £39.7m midfielder, who was so domineering in French and European competition, lose even the most basic footballing skills? When he was shown his red card, he stood frozen, as if his ability to walk had deserted him along with everything else.

There is still a fine footballer inside that athletic frame. But this did not feel like the first occasion on which Bakayoko had been a liability for Chelsea, and his travails speak to the struggles of a side that has won just two of 10 matches in 2018. Moment which changed the match

Chelsea were already struggling by the time Bakayoko was dismissed, but the red card provided another boost to the crowd and to the home side. Hazard's equaliser looked for a moment as if it would put Chelsea in control of the final exchanges, but the extra energy in the 11 Watford players made the difference at the death. Most influential player

Etienne Capoue was not given much of a chance under Marco Silva, but this was a performance that showcased all of his best qualities. His physicality in midfield was crucial to Watford controlling the first half, and his break helped create Daryl Janmaat's wonderful winner. Crowd rating

9/10: The home fans were predictably delighted with this thrashing of the champions. Credit, too, to the Chelsea supporters for some good humour in dark times. “Barcelona,” they sang, “we’re coming for you”.