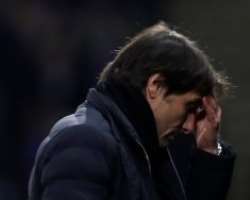 Antonio Conte asked for a vote of confidence from the Chelsea hierarchy but this crushing result sent out its own message: they are in a desperate fight to finish in the top four and with that status is in danger so is the head coach.

Watford deserved this win, the first since they sacked Marco Silva, which pushes them six points clear of relegation and while Conte will point to the first-half dismissal of Tiemoue Bakayoko as crucial he also knows they simply did not play well enough. Not for a team with their aspirations and expectations.

The visiting fans sang their support for Conte but it is the board and owner Roman Abramovich who matter and while there is an expectation that the Italian will leave at the end of this season he is risking that happening sooner should he fail to deliver Champions League football. That looming last-16 tie against Barcelona appears ever more crucial. If Conte lasts that long.

I t was a Barcelona man who undid Chelsea here with Gerard Deulofeu, on loan to Watford, man-of-the-match on what was his home debut winning a penalty and scoring. Troy Deeney's goal celebrations, as he planted the penalty into the net, angered the Chelsea fans. Late on Eden Hazard drew Chelsea level but then full-back Daryl Janmaat and Deulofeu won it with stunning, individual goals before there was another by substitute Roberto Pereyra.

Once again referee Mike Dean was at the centre of proceedings – dismissing Bakoyoko for two yellow cards. Inside the opening 30 minutes. In fact the two cards were issued just five minutes apart. Bakayoko had been hopeless – cue jokes that Chelsea were better off with 10-men – and the first caution came because of his poor control with the midfielder clumsily catching Etienne Capoue. The second quickly followed, again in a midfield tussle, as Bakayoko over-stretched to challenge Richarlison, stepping on the top of the Brazilian's foot.

A stunned Bakayoko was abused by the angry Chelsea fans as he trudged off and it had been a shocking performance from him with the dismissal leading to a tactical change by Conte who sacrificed the fit-again Willian – who had been his side's most dangerous attacker but, the head coach will have reasoned, would not last the match – and brought on Cesc Fabregas to provide some ballast.

C helsea were already up against it. Conte showed his frustration and was spoken to by Dean after angrily protesting as the referee decided not to book Daryl Janmaat after a foul on half-way.

Conte was soon even more furious. Watford earned a penalty. It came as Gerard Deulofeu, such a livewire, chased down a Janmaat through ball with Thibaut Courtois hurtling across. The goalkeeper clipped the winger, who went down, maybe easily, and Dean pointed to the penalty spot.

Chelsea protested that Deulofeu dived but the decision stood and Deeney stepped up and – as is his wont – drilled the penalty powerfully past Courtois. Watford were in front. Chelsea felt a swelling sense of injustice.

That defender was David Luiz, making his first Premier League start since October, and Chelsea were under severe pressure. Already Deeney had attempted to meet Marvin Zeegelaar's cross with, in the scramble, the ball rolling along Gary Cahill's arm.

And then a Richarlison shot was deflected for a corner. Watford worked it cleverly with Deeney peeling away to the back post. The ball reached him but, unmarked, the striker side-footed woefully wide. And he knew it.

Without the injured Alvaro Morata and with new signing Olivier Giroud on the bench, along with another new arrival, Emerson Palmeiri, Conte went without a striker and it was Willian who was presented with Chelsea's first chance –only to blast wildly over the cross-bar from deep inside the area. W atford continued to press and harry, knocking Chelsea out of their stride and with Richarlison prominent as he ran at the defence with another dangerous shot blocked.

Chelsea had lost their last six league games when trailing at half-time. Could they turn this one around? And with a man down, as well. It appeared an uphill task not least because they had appeared to disjointed and had been out-fought by an impressively competitive Watford with their rapid wingers – Deulofeu and Richarlison – pinning Chelsea back.

Eventually that intensity declined. Chelsea began to claim more and more possession and Watford dropped deeper although David Luiz was then booked for a frustrated kick at Zeegelaar. From the free-kick the ball was cleared to Deulofeu who curled a shot narrowly wide and then Deeney slid in to stop David Luiz. The ball broke to Richarlison who shot early when he could have ran into space and, again, beyond the post.

Conte had seen enough and introduced Giroud for the injured Pedro. He needed something in attack and Chelsea had provided so little threat.

Suddenly Hazard sprung to life and he collected possession again, cutting onto his right foot and – from 25 yards – curling the ball superbly beyond Karnezis and into the net. Deulofeu wrapped up a superb debut with a solo goal Credit: ACTION IMAGES

E xtraordinarily Watford immediately hit back with a quite brilliant goal from Janmaat who ran in from the right, evading two challenges, playing a one-two with Pereyra, evading two more Chelsea players and side-footing his shot back across Courtois. Remarkable.

But Watford were not finished. Deulofeu ran from his own half and as David Luiz and Cahill backed off he simply carried on and stroked the ball low into the corner. Incredibly they were not finished with Pereyra running onto Abdoulaye Doucoure's pass and hammering a cross-shot past Courtois. Chelsea had folded.