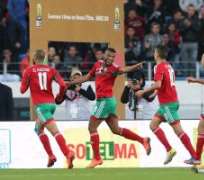 It was the first time both Morocco and Nigeria would play in the final of CHAN.

A brace from Zakaria Hadraf and a goal each from Walid El Karti and Ayoub El Kaabi, his ninth of the tournament, secured the emphatic win.

Moses Eneji, who made his first appearance in the tournament against Morocco, was sent off for a second bookable offence.

The last time both countries met in CHAN was in the quarter-finals of the 2014 edition when the Home Eagles, under the late Stephen Keshi, came from 3-0 down to win 4-3 after extra-time.

Morocco become the first country to host and win the CHAN and are the third North African team after Libya (2014) and Tunisia (2011) to win the tournament.

Nigeria are now the first country to lose 4-0 in the final of the CHAN.

Morocco almost took the lead on three minutes through Walid El Karti who connected with a cut-back only to see his effort go off target from close range.

Morocco thought they had opened the scoring but danger man Ayoub El Kaabi's goal was disallowed after the ball had gone out of play from a corner.

In the 15th minute, El Kaabi had a chance to open the scoring but his overhead kick came off the cross bar.

Nigeria had their first opportunity in the 25th minute after Eneji turned from his marker and laid on to Okechukwu Gabriel who was quickly closed down from shooting.

Morocco continued to create chances and in the 31st minute they went close again, this time through Jawad El Yamiq but his header from Ismail El Haddad's cross was saved by the impressive Dele Ajiboye.

In the 35th minute, Badr Benoun almost broke the deadlock from a knock down off a corner but scooped his chance over the top.

Two minutes later, Gabriel flicked the ball for Eneji who failed to connect before Osas Okoro's cross went out of range.

Ajiboye was forced to clear a danger on 44 minutes as he quickly came off his line to punch away El Haddad's whipped in free-kick.

Morocco's persistence eventually paid off on 45 minutes thanks to Hadraf who finished off a cut-back after Emeka Ogbugh was beaten for pace.

Just three minutes into the second half, Nigeria were reduced to 10 men as Eneji was sent off after receiving his second yellow card for a reckless challenge.

In the 53rd minute, the Eagles made their first change with Anthony Okpotu replacing Ogbugh.

Morocco almost doubled their lead on 54 minutes following a well-struck shot from Abdeljalil Jbira but Ajiboye palmed his effort away.

A minute later Ajiboye made a point-blank save to deny El Kaabi from getting on the score sheet.

El Kaabi went close again on 56 minutes after he was left unmarked but his free header went off target.

Morocco's constant pressure paid off as El Karti made it 2-0 on 61 minutes, heading in a rebound off an Ajiboye save after Nigeria failed to clear.

In the 64th minute, Morocco scored again to bring score to 3-0 as Hadraf pounced to register his second of the game.

Morocco should have added a fourth on 68 minutes but Ajiboye made a close range save to deny El Kaabi.

El Kaabi was not to be denied in the 73rd minute as he capitalised on another sloppy play by the Nigerian defence to make it 4-0.

The Moroccans were still not done yet as they went in search of a fifth late in the game but failed to make the effort count.