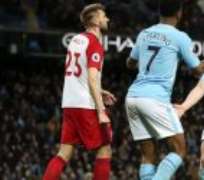 Manchester United and Chelsea couldn’t afford any slip-ups if they were to have even the slightest chance of catching Manchester City in the final months of the  Premier League .

Both lost on Wednesday, and saw City rack up another big win to move even closer to the title.

United conceded inside 11 seconds to Christian Eriksen and was beaten 2-0 by Tottenham at Wembley Stadium in front of a record Premier League attendance of 81,978.

Chelsea had a more surprising loss, upset 3-0 by Bournemouth at home after conceding all the goals in a 16-minute spell in the second half.

City took its opportunity to push 15 points clear in what is turning into a procession to the title, beating West Bromwich Albion 3-0 on the back of another masterful display by Kevin De Bruyne.

De Bruyne set up Fernandinho for the opener and then scored himself, before Sergio Aguero added a late third at Etihad Stadium. In the process, City went past 100 goals for the season in all competitions.

United stayed in second place while Chelsea dropped to fourth — below Liverpool on goal difference — and is now 18 points behind City.

“We knew the distance to the leader was already considerable, even before this match,” United manager Jose Mourinho said. “Now we have us, Chelsea, Spurs, Liverpool, Arsenal — we will be there fighting for three positions (behind City).”

Leicester was without Riyad Mahrez for its trip to Everton, with the Algerian not included in the squad after being the subject of a bid from Man City on Tuesday, and missed its star winger in a 2-1 loss at Goodison Park.

Burnley and Southampton came from behind to secure 1-1 draws against Newcastle and Brighton, respectively. Stoke and Watford drew 0-0.

CITY CRUISE
So much for Man City’s loss at Liverpool on Jan. 14 reviving the title race.

It hasn’t derailed the leaders, with City winning four straight games in all competitions — two coming in the league — in an impressive reaction to stay on course for an unlikely but increasingly possible quadruple of trophies.

Certainly the league looks sewn up. City swotted aside West Brom for a 13th straight win in league matches between the teams.

“At times, I wanted to give my players a cuddle because I felt for them,” West Brom manager Alan Pardew said.

With John Stones ill, record signing Aymeric Laporte started for City despite having just 45 minutes of training with his new team after sealing his move from Athletic Bilbao on Tuesday. He had an accomplished debut.

David Silva went off injured in the 39th.
FAST START
Only five touches of the ball were needed before Eriksen curled home a shot to give Tottenham a lead it never looked like surrendering against United. It was the third fastest goal in Premier League history.

Receiving the ball from the kickoff, Jan Vertonghen took a touch and sent a long ball forward that Harry Kane flicked on. Dele Alli flicked it behind him with a first-time pass and Eriksen met it with a finish past David De Gea.

“It’s a performance that starts with a ridiculous goal,” Mourinho said.

Phil Jones inadvertently turned Kieran Trippier’s cross into his own net in the 28th minute for Tottenham’s other goal.

Alexis Sanchez made his first league start for United but struggled to make an impact.

It was Chelsea’s first home loss in all competitions since September and the team’s first loss in nine league games.

Chelsea manager Antonio Conte complained ahead of the game that preparation had been affected by the uncertainty surrounding striker Michy Batshuayi, who ended up leaving the club hours before kickoff to join Borussia Dortmund. Olivier Giroud was signed from Arsenal in his place, but wasn’t eligible for the game.

Just a week ago, Chelsea was also eliminated from the League Cup by Arsenal in the semifinals and Conte’s second season in charge is proving much tougher than his first.