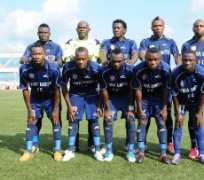 Akwa United moved to the summit of the Nigeria Professional Football League following a comfortable 3-0 win against Kwara United at the Godswill Akpabio International Stadium, Uyo,  on Sunday.

The  Promise Keepers have 12 points from five games, the  same as defending champions Plateau United, who defeated MFM FC 1-0 on Saturday. Akwa, however,  have a better goal difference than the Jos-based clubside.

Michael Ibe set Akwa United on the road to  victory with a sweet finish in the 13th minute.

Victor Mbaoma increased the lead in the 21st minute for his third goal of the season, before Ubong Friday got the third for the home side,  nine minutes after the break.

In arguably the star match of the weekend, Rivers United and Enyimba battled to a 1-1 draw at the Yakubu Gowon Stadium in  Port Harcourt.

Enyimba went ahead in the first half of  added time when Stanley Dimgba converted a penalty awarded after  Chinonso Okonkwo was tripped in the box by Gabriel Olalekan.

Substitute Israel Daniel rescued a point for the hosts when he levelled scores 13 minutes from time.

Enyimba were reduced to 10 men eight minutes from the end when Okonkwo was sent off for time wasting.

The result moved Rivers United to 11th position, while Enyimba are joint 14th with Enugu Rangers on the log.

In Makurdi, Lobi Stars defeated Niger Tornadoes 3-1,  courtesy of a brace by Samad Kadiri in the 35th and 70th minutes respectively, while Ezekiel Mbah scored the opener in the 11th minute.

Kadiri is now at par with Kano Pillars' Junior Lokosa at the top of goal scorers' chart. Both men have scored four goals each so far.

The win helped Lobi Stars climb  to third, while Niger Tornadoes slumped further to 13th on the log.

Former champions Heartland FC of Owerri were held to a 1-1 draw by Yobe Desert Stars at the Dan Anyiam Stadium, Owerri.

Yobe Desert Stars took a shock lead through Chinedu Ohanachom on fifth minute, before Mohammed Azeez restored parity for the Naze Millionaires in the 32nd minute.

The visitors were reduced to 10 men when Chidiebere Ajoku was sent off eight minutes from time.

Heartland slipped down to 17th, while Yobe Desert Stars maintained their ninth spot.

Katsina United enjoyed a comfortable evening at the Muhammadu Dikko Stadium with a 3-0 thumping of Go Round FC of Port Harcourt.

Eric Dufegha, Joshua Agboola and Martins Usule were all on target for the hosts in the 4th, 22nd and 90th minutes respectively.

Katsina shot to 7th, while Go Round FC slipped one step further to 18th on the log.

At the New Jos Stadium, Wikki Tourists beat FC IfeanyiUbah 1-0 with Nafiu Kabuga scoring the winner in the 31st minute.

Wikki Tourists shot to the fourth position, while FC IfeanyiUbah slipped to 12th position on the NPFL log.

Abia Warriors and Sunshine Stars of Akure ended their game in Umuahia in a 0-0 draw.

The visitors are now unbeaten in their last six games against Abia Warriors with three wins and three draws.

Sunshine Stars slipped to the sixth position, while Abia Warriors maintained their eight spot on the NPFL log.

The all northern affair between El- Kanemi Warriors of Maiduguri and Kano Pillars in Maiduguri also ended in a 0-0 draw.

The result meant Kano Pillars slipped two steps down to fifth, while El-Kanemi climbed two steps further to the 10th spot on the NPFL log.

The News Agency of Nigeria (NAN) reports that a total of 17 goals were scored on Match Day 5 with six home wins and four draws recorded.

Enyimba had earlier defeated Nasarawa 1-0 on Thursday at the U.J. Esuene Stadium, Calabar, while Champions Plateau also beat MFM FC 1-0 at the Rwang Stadium in Jos on Saturday. (NAN)