Chelsea close in on Emerson, worry about Thibaut Courtois staying 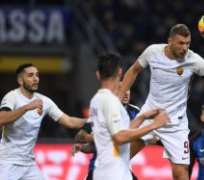 Chelsea  are deliberating over whether or not to break their own transfer policy to sign Edin Dzeko after Emerson Palmieri agreed to move to Stamford Bridge from Roma .

And there are  fresh fears over the future of goalkeeper Thibaut Courtois , with Real Madrid keen for him to stall over his new Chelsea contract.

Emerson, a left-back, is ready to join Chelsea on a four-year £80,000-a-week contract and the club must now decide whether to complete a double deal with Roma that includes 31-year-old Dzeko for a combined fee of around £44 million.

Roma are prepared to sell both players and, barring any late hitch with a medical, Emerson expects to become a Chelsea player in the coming days.

The only remaining doubt over Dzeko is whether or not Chelsea are prepared to sanction his part of the transfer that would be worth in the region of £24m.

Chelsea have generally not paid transfer fees for outfield players over the age of 30 in recent years. Samuel Eto'o joined on a free transfer in 2013 and Didier Drogba returned to the club for nothing a year later.

Both strikers were handed one-year contracts and that also presents an issue in terms of Dzeko, who will turn 32 in March.

His Roma contract is not due to expire until 2020 and Chelsea will either have to break their policy of one-year deals for over 30s or somehow negotiate a compromise.

David Luiz, Pedro and Cesc Fabregas are all aged 30, and have one year remaining on their contracts. The trio are currently under the impression that Chelsea will not hand out extensions over 12 months to players of their age.

Dzeko is yet to agree to a move to Chelsea and wants guarantees over getting enough playing time at Stamford Bridge, but even though he will be ineligible for the Champions League, that should not be a problem.

Chelsea are still in all three domestic competitions and, particularly with Alvaro Morata struggling for form and confidence, it is expected Dzeko would come in to play regularly.

He has scored 14 goals this season, including two against Chelsea in the Champions League, although only two of those have come in his last 17 appearances. Out-of-form Morata has netted five times over the same number of matches.

Head coach Antonio Conte has wanted a target man to complement and challenge Morata , and Dzeko certainly fits the bill. His four-and-a-half seasons at Manchester City should also ensure he does not require an adjustment period to English football.

Emerson is initially joining as a back-up to left wing-back Marcos Alonso and his arrival will finally allow Kenedy to complete a loan move to Newcastle United.

Chelsea decided against a new move for Alex Sandro after learning that Juventus still wanted around £60m to sell the Brazilian this month.

Agreeing a fee over a potential double deal for Dzeko and Palmieri was made easier by the fact Roma, who Chelsea signed Antonio Rudiger from last summer, need to raise funds to meet Financial Fair Play requirements.

Roma director of football Monchi hinted the Italians are planning for life without Emerson and Dzeko by saying: “Whatever will be will be. I work every day to have players suitable to replace our players, my job is always to strengthen my club. If [Dzeko] leaves Roma, we’ll buy another player.”

Thibaut Courtois has been linked with a move to Real Madrid Credit: GETTY IMAGES

Chelsea had expected Courtois to sign a new contract this month after offering him a deal that would make him the highest paid goalkeeper in the world.

Talks had been going well with negotiations entering the final phase and Courtois suggesting that he was ready to sign.

But Real Madrid are understood to have reiterated their long-standing interest in Courtois after missing out on Athletic Bilbao goalkeeper Kepa Arrizabalaga.

Arrizabalaga had been expected to join Real this month, but the fact he has signed a new Athletic deal means the European champions are still on the lookout for a new goalkeeper.

Chelsea still hope they can finalise a new contract with Courtois before the end of the season, but must now nervously wait to see whether or not Real attempt to ruin their negotiations.

Courtois is fit to face Arsenal in the Carabao Cup semi-final second-leg at the Emirates after missing the Premier League victory over Brighton with a sprained ankle.

Conte faces a selection dilemma up front with Morata available again, but Chelsea impressing with Michy Batshuayi, Eden Hazard and Willian impressing in forward positions at the weekend.