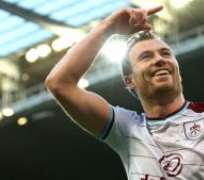 Chelsea have expressed an interest in Burnley’s Ashley Barnes as they widen their search for a target man, Sky Sports News understands.

The Blues have made enquiries for a string of big centre-forwards over the past week including Andy Carroll, Fernando Llorente, Peter Crouch and Edin Dzeko.

According to Sky sources, Burnley have not had any contact from Chelsea.

Barnes has scored four goals in 26 appearances for the Clarets this season, although most have come from the bench.

The 28-year-old has made only eight Premier League starts during Burnley’s impressive current campaign. Barnes has scored four goals for the Clarets this season

But he fits the profile of player Chelsea boss Antonio Conte wants to add to his squad and the Italian has found the way blocked for a number of other targets.

First-choice Carroll is out for at least a month  with an ankle injury that may require surgery , according to West Ham boss David Moyes.

The Transfer Talk panel discuss whether Alexis Sanchez will prosper at Old Trafford.

And according to Guillem Balague, Tottenham rejected a loan approach from Chelsea for Llorente, who was a target for Conte before he signed for Spurs last summer.

Sky in Italy have reported that talks have taken place over a £44m +£8.8m deal  for Dzeko and Roma left-back Emerson Palmieri .