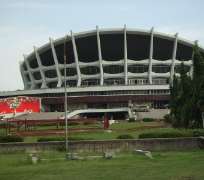 This is coming few weeks after the National Theatre workers staged a peaceful protest against the move. Recently, workers under the aegis of Amalgamated Union of Public Corporations, Civil Service Technical and Recreational Services employees (AUPCTRE), National Theatre Chapter, also reacting to a publication in the Nation of May 16, 2010, held what they call a meeting of the workers to review the situation.

Chairman of AUPCTRE, National Theatre Chapter, Mr. Dayo Kogun disclosed that members of the union maintains their earlier position, urging the Federal Government not to listen to the plight of the workers.

According to him, in March 29, they held a meeting in which workers resolved that they do not want the Federal Government to bring Mallam Kabir Yusuf back to the National Theatre. Accusing him of insensitivity to the plight of the workers, Akogun said: “The six months spent in the National Theatre as the General Manager was a disaster. Just smarting from the achievement of Professor Ahmed Yerima, we started seeing retrogression in all ramifications of the National Theatre. Mallam Kabir Yusuf does not have the pedigree; he is not an art person. He is quarrelsome; and does not have the finesse. He is at war with industry players; he is a Mister Know-all. There was a time stakeholders in the arts and culture sector protested against the privatisation of the National Theatre. We see him as somebody that wants to rock the boat again, and give government the reason to privatise the place, because if we are unable to maintain the place, definitely with his maladministration. Prof. Ahmed Yerima's tenure was the kind of leadership that was collectivity in decision making. He calls everybody around and we all move. The result is what you are seeing to day – he renovated the halls to the extent that today if you have a programme in any of the halls in National Theatre, you have to physically beg us to put off some of the air conditioning systems because some of the halls are over cooling. All of those are the effort of Prof. Yerima. He had very good working relationship with the press, good working relationship with industry players, artists and stakeholders in the culture sector.

“But Yusuf's six months here we have discovered that he does not even understand what National Theatre is all about, so he cannot manage it. The workers don't have confidence in him again. Workers welfare to him is not important at all.”

Akogun further stated that the resolution of the workers rising from a meeting on Wednesday May 19, is that they don't want Yusuf back at the National Theatre.

“When we saw the publication in the Nation of May 16, 2010, that he has been recalled and that the acting General Manager has vacated his office, took us by surprise because we had earlier made our position to the government through written document. So we denounce that publication, it is capable of causing industrial disharmony. Because of that publication we had a meeting on Wednesday to review our earlier decision and the workers without any opposition resolved again that they don't want Yusuf again, and that union will give it all it deserves. So for purposes of harmony and for the progress of the National Theatre we are hoping that government will consider our position and should not bring Yusuf back here again.”

In a communique issued after the meeting the group stated: “The general meeting of the Amalgamated Union of Public Corporation, Civil service Technical and Recreational Services Employees (AUPCTRE), National Theatre Branch held on May 19, 2010, it was resolved among others; one, that the March 29 resolution which states that Mallam Kabri Yusuf Yar'Adua should not return to the National Theatre stands; two, that the congress denounces the publication in the Nation newspapers of May 16, on page seven, as capable of generating industrial unrest and disharmony in the National theatre; three, that the Union remains indivisible and resolute in their demands and will leave no stone unturned to achieve the mandate; and four, that members resolve to pass a vote of confidence on the AUCPTRE executive and the Management as presently constituted.”