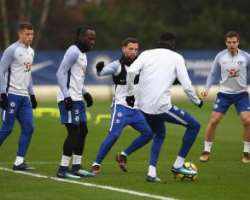 CHELSEA could be set for a battle on their hands to keep hold of N'Golo Kante with Paris Saint-Germain preparing a bid in the summer.

Kante became the first player in Premier League history to win the title in consecutive years with two different clubs in 2016 after winning with Leicester and Chelsea.He was hailed as one huge reason for both Claudio Ranieri and Antonio Conte winning the English top flight.

Chelsea have struggled to live up to expectations from last season with Conte bemoaning the club's transfer business in recent months. And he could have another dilemma on his hands come the end of the season with French outlet  Le 10 Sport  claiming PSG have made Kante their top transfer target for the summer.Kylian Mbappe is expected to make his loan move from Monaco to PSG permanent at the end of the season with his former club set to pocket £153m.

But the rich Ligue 1 club are prepared to splash out more cash on signing Kante to replace Thiago Motta.

GETTY
PSG want to sign N’Golo Kante in the summer Conte was one of the main reasons for Kante opting to join Chelsea from Leicester and there have been suggestions the Italian coach could leave in the summer.

One club linked as a possible destination has been PSG with Unai Emery under pressure to deliver in the Champions League.And that could potentially help the French giants push through a deal to take Kante to Paris.