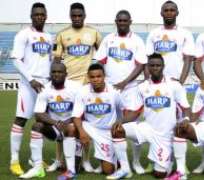 Goals from debutant Kelly Kester and Dennis Nya saw Abdu Makaiba's side get the better of the Flying Antelopes at the Godswill Akpabio International Stadium.

Makaiba's side came into the season on the back of their success in the Federation Cup in the last campaign and knew there was to be no place for complacency on opening day.

They had the better of the early exchanges but could not break down a stubborn Rangers side that defended with their lives.  The Promise Keepers eventually broke the deadlock in the 40th minute with a brilliant volley from new boy Kester.

It was no less than the home side deserved following an attacking display in the opening half that saw them pin Gbenga Ogunbote's side back.

After the interval, the Flying Antelopes came out the stronger side and finally tested Olorunleke Ojo in Akwa United goal. The shot-stopper was equal to the task, thus, producing two top saves to preserve the Promise Keepers’ lead. With the away side pressing forward for an equalizer, Akwa United got a second in the 67th minute against the run of play courtesy of Nya.

It ended 2-0 to the hosts who occupy the second spot in the fresh-faced 2017-18 Nigerian top-flight log.