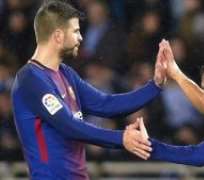 Luis Suarez inspired a spectacular FC Barcelona comeback on Sunday to help the Spanish La Liga leaders return from two goals down to beat Real Sociedad 4-2 at Anoeta on Sunday.

Willian Jose sent the hosts ahead in the 11th minute and Juanmi added a second goal in the 34th at a ground where FC Barcelona had not won in the La Liga since 2007.

However Suarez set up Paulinho to pull one back before half-time, before scoring twice himself.

Lionel Messi added some gloss with a perfectly-placed free kick for FC Barcelona's fourth goal in the 85th minute to end a thrilling game in spectacular fashion.

The victory ensured FC Barcelona remained unbeaten and and stayed nine points clear of second-placed Atletico Madrid at the top of the table at the halfway stage of the season. (Reuters/NAN)