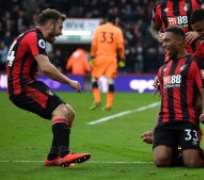 Arsenal lost further ground on the top four in the English Premier League (EPL) on Sunday after struggling Bournemouth came from behind to beat them 2-1 at the Vitality Stadium.

Hector Bellerin fired through Asmir Begovic to open the scoring for Arsenal in the 52nd minute.

But Callum Wilson and Jordon Ibe scored within five second-half minutes to turn the game on its head.

First, Wilson converted Ryan Fraser's teasing cross to restore parity in the 70th minute before Ibe fired home a second having been teed up by the scorer of Bournemouth's first.

Alexis Sanchez, heavily linked with an exit from the Emirates, was left out of Arsenal's squad.

However, manager Arsene Wenger said before the game that a decision on his future was “imminent”.

Having won just one of their last five Premier League matches, Arsenal remain sixth with 39 points — five behind rivals Tottenham Hotspur in fifth.

Arsenal manager Arsene Wenger, in his post-match reaction blamed his team's defeat on a loss in concentration, adding that it was a game they had to win.

“We were 1-0 up and suddenly we lost two goals and we don't know where they came from. It is very frustrating.

“Overall we have to look at it in a very objective and harsh way, as we made mistakes we should not have made.

“The team that fights against relegation will fight and you cannot afford any concentration mistake.

“We had to win the game. I think if you look again at the second goal we made many mistakes and that is what we paid for,” he said.

On Alexis Sanchez transfer rumour, Wenger said: “Half in half out, you never know this kind of situation during the transfer period. That is why I decided to focus on the game.”

Bournemouth manager Eddie Howe, on his part, noted that it was a huge win for the club.

“Every win in the Premier League is important. It was a tight game, not a lot in it but we showed the spirit and desire to come back from a losing position.

“I am delighted with the attitude of the players today. Our fitness levels were very good today, statistically we are one of the fitter teams in the division.

“We will enjoy tonight, that was a famous win for the club,” he said.