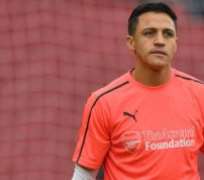 Forward Alexis Sanchez will leave Arsenal in January if a suitable offer arrives and a replacement is secured.

It is understood the Gunners hierarchy have privately accepted for some weeks that Sanchez is likely to depart after three and a half years at the club.

However, Arsenal are reluctant to sell without replacing the Chilean and their first choice is Bordeaux’s 20-year-old Brazilian forward Malcom.

Conversations have been held between the clubs but there is as yet no agreement on a fee.

Arsenal are thought to have asked for up to £35m, with Premier League leaders City initially suggesting they would pay around £20m. Sources anticipate a compromise of between £25m and £30m.

It is also widely reported that Manchester United will rival City’s interest and have already made a bid.

If a deal cannot be agreed, Sanchez will be able to leave when his contract expires in the summer – a situation Arsenal are keen to avoid as they would receive nothing.

The Chile international almost joined City for about £60m on the final day of the summer transfer window, only for the switch to collapse when Arsenal failed to sign Monaco and France midfielder Thomas Lemar.

Responding to reports that said a £25m bid had already been made, he told Sky Sports: “If you look back at Manchester United’s big signings over the decades, Eric Cantona came out of the hat, [Robin] van Persie was a surprise – and they both helped United win titles.

“I think this could have a similar impact. He’s got the character to play at Old Trafford,” the ex-England international added.

“It would be a coup, particularly for United fans, to have a player like Sanchez come to them over City. It would be a strong statement.

“It’s pretty obvious he’s not going to stay at Arsenal. I think if United were going to buy him, £25m would be an absolute snip.”