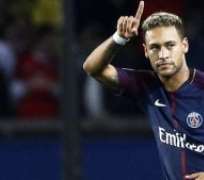 Cristiano Ronaldo’s market value has plunged and the Real Madrid star is now just the 49th most valuable player in the world, according to research from the  CIES Football Observatory .

Only last month Ronaldo won a fifth career Ballon d’Or award, while he also took the FIFA Best Player prize and UEFA player of the year award during a year in which he was easily the most decisive player as Madrid won five trophies including the Champions League and La Liga.

However the 32-year-old’s past achievements do not count for CIES’ valuations which have Paris Saint-Germain’s Neymar, 25, top of their list at €213 million, followed by Barcelona’s Lionel Messi on €202.2m and Tottenham’s Harry Kane third on €194.7m.

New Barcelona midfielder Philippe Coutinho is 16th with a value of €123m, while Ronaldo’s expected value of €80.4m has him between Manchester United forward Anthony Martial and Monaco’s utility man Fabinho in the rankings.

Gareth Bale was the world’s most expensive player between 2014 when he joined Madrid for €101m from Tottenham and 2017. But the Wales international now does not even make the top 100 in the 2018 CIES list. His teammate Marco Asensio, 21, is down in 94th on €51.2m, five places below Southampton winger Nathan Redmond (89th).

AP Photo/Paul White
CIES say their assessment “takes into account the key criteria used by market actors such as age, position, contract duration, performance and international status.” But the announcement that Ronaldo had slipped to 49th place caused so much traffic that it  crashed their website  on Monday afternoon.

An alternative list of the world’s most valuable footballers on  Transfermarkt.com  has Ronaldo still joint third with Kane on £108m. That list has Messi (£162m) top ahead of Neymar (£135m), with Isco and Bale in joint 21st place (£67.5m).

The Portugal captain is currently seeking a salary increase from Madrid president Florentino Perez, with reports in Spain suggesting that he wants to be paid the same as Neymar and Messi who have recently signed new contracts which included a raise.

Ronaldo’s five-year deal, which was signed in November 2016, includes a €1 billion release clause, and though he made it clear last summer that he would consider a move away from the Bernabeu, there were no official bids from other clubs.