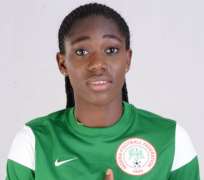 In a statement by his Special Adviser on Media and Publicity, Mr. Femi Adesina, the President lauded the Falcon’s team member and all football lovers for the award which he described as “most deserved honour.”

He noted that the award will naturally translate into more responsibilities for exploits on the football field, and her country.

The statement t read in part, “The President commends the strength, dexterity and focus Oshoala has displayed, working really hard from an early age to represent Nigeria in international tournaments before she was 20 years, and always showcasing her skills in her clubs.

“President Buhari believes that the footballer’s many awards and achievements, which includes winning the CAF award for the third time, at such age clearly demonstrates that she always rises to the occasion as a professional, and deserves continental recognitions.”