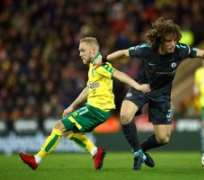 W ho would have thought, barely 48 hours ago, that Antonio Conte would end the weekend with a pair of rather pressing problems?  The first of those is a certain Jose Mourinho who , as we learned on Friday night, is hellbent on waging a campaign of media warfare against the Chelsea manager. The second is an unexpected addition to Chelsea's already congested fixture list, as a dogged Norwich City side held the Premier League champions to a deserved draw at Carrow Road.

Having lost just one game in 15, a trip to face a mid-table Championship side seemed unlikely to pose too much of a challenge. But, then again, neither did a Manchester United press conference  following a routine FA Cup victory over Derby County . So here we are, with Chelsea needing to find time for an unwanted replay and Conte having to deal with an escalating conflict with the master of footballing feuds.

Conte's side never found their groove here, and rarely troubled Daniel Farke's impressive Norwich outfit, who will perhaps consider themselves unfortunate not to have turned their first-half dominance into a memorable victory. Against a desperately poor Chelsea team, Norwich were the more energetic, creative and exciting side, and frankly, deserved more than this stalemate.

With Chelsea set to face Arsenal on Wednesday in the first leg of their League Cup semi-final, Conte made nine changes to the side that had featured in that  thrilling 2-2 draw at the Emirates in midweek . The rotation meant that David Luiz was selected for only the second time since October, while backup goalkeeper Willy Caballero and the Brazilian Kenedy made just their fourth appearances of the season.

There was also space for Michy Batshuayi, who has largely failed to impress his manager in a turbulent first half to the season but boasts an impressive record against lower league opposition. In four matches against sides below the Premier League before this trip to Carrow Road, the Belgian had scored seven goals and created two others.

T he wholesale changes appeared to take their toll in the first half as Conte's unimaginative side struggled for fluidity and coherence in possession. Norwich, meanwhile, looked threatening through electric winger Josh Murphy, their top scorer this season, and the highly-rated attacking midfielder James Maddison.

It would, though, be an exaggeration to say that Daniel Farke's side looked particularly close to breaching that Chelsea defence in what was a tentative start to proceedings. Maddison had the first glimpse of goal but was blocked by a mass of Chelsea legs, while Murphy curled well over after another of those jinking runs down the Norwich left.

In truth, the home side's best opportunity in the first half appeared to be to give the ball to Luiz in the hope that he might implode. It certainly looked a viable plan after 25 minutes, when Luiz was unnecessarily caught in possession twice in the space of a few seconds. The first occasion was in his own penalty area, and nearly allowed Norwich forward Alex Pritchard the easiest of openers. The second, just a moment later, gave Pritchard an opportunity to bustle his way towards goal, where his shot was blocked as the overlapping Murphy screamed for a pass.

A difficult return to the side for Luiz, who has been overtaken by Andreas Christensen in the defensive pecking order this season, was then made worse by a yellow card he was awarded for a late challenge on the turning Maddison.

W ith his speed and weaving runs, Murphy was the game's stand-out attacking player, and Chelsea defender Antonio Rudiger could have been forgiven for needing a brief lie-down at the break. One particularly explosive burst sent the Norwich winger clear in the penalty box as his side continued to dominate, but his final ball was neither shot nor cross.

Murphy's twinkling feet contrasted sharply with the stodginess of Willian, Pedro and Batshuayi in the Chelsea attack, where the absence of Alvaro Morata, Eden Hazard and Cesc Fabregas was clearly having a telling impact.

As the game wore on, Norwich grew in confidence. Suddenly, they very much did look like scoring, as Maddison curled over from range and a threatening cross from Pritchard forced Chelsea's Davide Zappacosta into a crucial clearance.

T hankfully for Chelsea, Willian was a man reborn after the break, dipping between challenges and firing shots on goal. Danny Drinkwater and Pedro also had attempts from range, while Norwich were for a time too preoccupied with defending to overly worry about the other end.

But they were able to regroup, just at the point it looked like the game may be slipping away from them. Pritchard and Murphy went close again, while Timm Klose headed wide. At this stage, though, both sides became frightened of over-committing, and a draw ultimately proved inevitable, even if Zappacosta nearly won it at the death with a strike from range.