Mohammed Salah is African Player of the year 2017 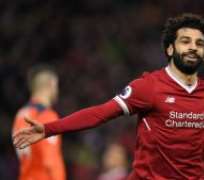 Egypt winger Mohamed Salah was named the African Player of the Year on Thursday, finishing ahead of Senegal winger and Liverpool teammate Sadio Mane and Gabon striker Pierre-Emerick Aubameyang.

Salah had a year to remember for club and country in 2017, establishing himself as one of the most effective attackers in Serie A, as club side AS Roma finished second to Juventus n Italy, before moving to Premier League side Liverpool in the off-season.

The 25-year-old settled right away on Merseyside and is currently the club’s top scorer in all competitions in the 2017/18 season to date.

Meanwhile, Salah also played a pivotal role as the Pharoahs qualified for the 2018 World Cup for the first time since 1990, including a dramatic 95th-minute winner against Congo in their penultimate qualifying match.

“Winning this award is a dream come true. I want delicate this award to the kids in Egypt and Africa. I want to tell them that never stop dreaming,” Salah said after receiving the award.

The awards ceremony in Ghana’s capital, Accra, proved a successful one for Egypt, after the Pharoahs was named the national team of the year, and Hector Cuper was named coach of the year.

The Awards winners in full:
Men’s Player of the Year: Mohamed Salah (Egypt)