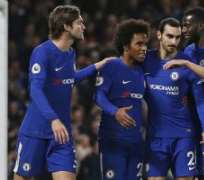 Chelsea looked in a relentless mood as they put five goals past Stoke City in a comfortable 5-0 win at Stamford Bridge.

The Champions made three changes to the side who beat Brighton 2-0 in their last Premier League outing. Out went Eden Hazard, Cesc Fabregas and Tiemoue Bakayoko, who made way for Danny Drinkwater, Pedro and Willian.

Chelsea made a blistering start to the game, and found themselves in front inside the first three minutes as Willian’s free-kick on the right-hand side was met by the head of Antonio Rudiger, who scored his third goal of the season.

The goal means the Stoke have still only managed to keep two clean sheets so far this season, and things only got worse for the Potters. Just five minutes later it was 2-0, after Pedro’s deflected cross landed in the path of Drinkwater, who unleashed a stunning half-volley from 20-yards out which sailed past Jack Butland into the top corner to double the hosts’ lead.

The bombardment from Chelsea kept coming with Stoke struggling to get out of their own half, and they soon paid another hefty price. Pedro received the ball from Willian on the edge on the box, and drove a low effort into Butland’s bottom right-hand corner to make it 3-0 to the home side less than half an hour into the game.

Chelsea looked to be in a hungry mood as they continued to press forward, however with just five minutes until half time, Stoke thought they’d found a way back into the match.

Against the run of play, Charlie Adam played an accurate long ball over the top of the Chelsea defence which Diouf controlled and neatly slotted beyond Thibaut Cortious, however Diouf was judged to have handled the ball whilst bringing it under control, ruling out the goal much to the frustration of the forward.

The second half began how the first half ended, with a chance for Stoke against the run of play. This time after a spell of Chelsea possession, Adam played through Berahino who beat Gary Cahill for pace, however a strong hand by Cortouis turned his effort away from goal as Chelsea continued to frustrate the visitors.

The hosts continued to pepper the Stoke City goal with chances, and the pressure soon forced another error from the Stoke defence after Geoff Cameron brought down Willian in the box to gift Chelsea a penalty. Willian himself stepped up and sent Butland the wrong way to make it 4-0.

Stoke looked dead and buried, and Chelsea took full advantage when Davide Zappacosta picked the ball up on the edge of the area and stuck a low effort past Butland to make it 5-0 just two minutes shy of injury time, to complete what was a very enjoyable day at the office for Antonio Conte and his side.

The win now means Chelsea have leapfrogged Manchester United into second place, although United have a game in hand, and have now gone five games without defeat. As for Stoke, they drop one place to 14th, and have now conceded 46 goals this season – the most in the Premier League.