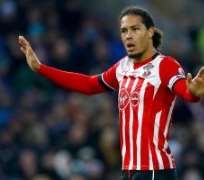 A report in British outlet The Telegraph has claimed that Liverpool have won the race to sign Southampton defender Virgil van Dijk £75 million.

Manchester City right-back Kyle Walker is currently the most expensive defender in the world with his £54m move from Tottenham last summer.

The Telegraph reported on Wednesday that Liverpool and Southampton resumed negotiations recently after a potential deal last summer was scuppered after the Saints reported Liverpool to the FA for tapping up their player.

The two clubs are said to have reached agreement on the transfer on Wednesday, few days before the January transfer window officially opens.

Manchester City and Chelsea were also reportedly interested in the Ducthman and made inquiries.

Van Dijk, 26, will reportedly earn around £180,000 per week at Liverpool, whose defence has been under intense scrutiny this season.