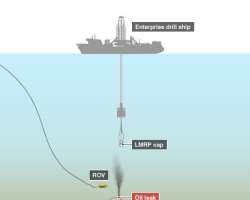 A containment cap on a ruptured well in the Gulf of Mexico is now funnelling off 10,000 barrels of oil a day, BP's chief executive Tony Hayward says.

The amount has risen since Saturday, and implies more than half the estimated 12,000 to 19,000 barrels leaking each day is now being captured.

The spill has been described as the biggest environmental disaster in US history.

Mr Hayward told the BBC that BP would restore the Gulf to its original state.

Speaking on the Andrew Marr Show, Mr Hayward said: “As we speak, the containment cap is producing around 10,000 barrels of oil a day to the surface.”

Asked what amount of the estimate that represented, the BP chief executive said it was “probably the vast majority”.

“We have a further containment system to implement in the course of this coming week which will be in place by next weekend so when those two are in place, we would very much hope to be containing the vast majority of the oil.”

His company, he said, was going to stop the leak and take care of the consequences.

“We're going to clean-up the oil, we're going to remediate any environmental damage and we are going to return the Gulf coast to the position it was in prior to this event. That's an absolute commitment, we will be there long after the media has gone, making good on our promises.”

Optimism
The Deepwater Horizon rig sank on 20 April after an explosion, killing 11 workers.

Both BP and the US government have been criticised for the response so far.

President Barack Obama has pledged to stand with the residents of Louisiana unitil they are “made whole”.

Mr Obama has said he will ensure that BP is financially accountable for the damaged caused.

The containment cap is designed to funnel most of the leaking oil to a boat on the surface. BP is also digging two relief wells which it hopes will provide a permanent solution to the leak – but they are not due to be completed until August.

The estimates for the total amount of oil that has leaked since the spill began vary widely from 20 million to 45 million gallons.

Four states have so far been affected by the spill – Louisiana, Mississippi, Alabama and Florida.

The oil company, whose share price has dropped by a third since the accident, has been coming under fire for spending a reported $50m on TV advertising to improve its image while the crisis was still going on.

BP says it has spent more than $1bn so far on clean-up and containment efforts since the Deepwater Horizon rig accident.