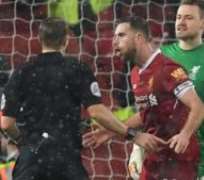 With 76 minutes played as the snow cascaded down at Anfield, the post-match line was clear: No Philippe Coutinho or Roberto Firmino, no problem.

Liverpool had dominated the Merseyside derby so thoroughly that the 1-0 scoreline – courtesy of another stunner in Mohamed Salah's bulging collection – was incredibly kind to Everton at that point in a ridiculously one-sided encounter.

Jurgen Klopp's men had created more than enough to wreck the visitors' festive period for a second year running, but as Dejan Lovren gave referee Craig Pawson a decision to make after putting his hands on Dominic Calvert-Lewin, it felt like Christmas had been cancelled for the Reds.

Penalty to Everton. Wayne Rooney over it. The boyhood Blue, who became Manchester United's all-time top scorer, converting the spot-kick to level matters. It was his first goal in the rivalry and the only sniff Sam Allardyce's charges had on Sunday afternoon.

And so, when the clock struck 77 minutes and the scoreline was altered, so too did the narrative.

Klopp's rotation, which would have been marked as a sign of strength otherwise, was to blame for the dropped points – not a moment of cunning from Calvert-Lewin met with idiocy from Lovren, or the opportunities Liverpool spurned to further put their boot on the throat of their rivals.

The German's shuffling of his pack has allowed the Reds to have an important balance of rhythm and freshness through an exacting time. Having watched the injuries stack up during a packed schedule in the previous campaign, Klopp wanted a squad more equipped to handle a heavier workload and has put his roster to good use in recent weeks.

Liverpool have not suffered defeat in the 10 matches since their 4-1 humiliation at Tottenham, scoring 33 times and conceding seven as the manager has switched both personnel and formation.

The suggestion that Klopp's selection is the reason for his side matching their longest-ever unbeaten run against Everton with a draw rather than victory is a result-based analysis rather than one taking into account the contrasting performances as a whole.

The plan from the visitors in the opening half could be summarised by the phrases 'get rid' and 'get back’. Liverpool were more troubled by slippery surface than their neighbours, who huffed and hoofed with zero threat.

They had just a solitary shot in the first 45, with no corners or crosses from open play. Goalkeeper Jordan Pickford had more touches than any of his team-mates and Jordan Henderson had completed five more passes than Everton had collectively strung together.

It would have been frustrating had Liverpool entered the interval on level terms, but on 42 minutes, the player of the match at that stage and the standout star of their season combined to break through.

Joe Gomez, phenomenal on his debut in this fixture, fed Salah on the right. The Egyptian shrugged off Cuco Martina with ease before shimmying away from Idrissa Gueye, and as Ashley Williams approached, he curled a beauty into the top corner.

It was the 25-year-old's 13th league goal of the campaign – the same figure managed by Sadio Mane and Philippe Coutinho in the entirety of 2016-17.

After the break, Liverpool's control of the clash continued with Salah heading wide, Gomez nodding over and Everton engaged in more clearances than anything they managed to offer in the encounter.

Mane was atypically guilty of poor decision-making, and as Klopp reflected afterwards: “Only one team tried for over 95 minutes to win it. The other team were not in our box and didn’t have a chance bar the penalty.”

The 50-year-old was also accurate with his response when asked about rotation. “I thought before the game, yes. Still yes, even when the result doesn't show it,” he said of his decision to hold Coutinho and Firmino in reserve.

“We did it in the last six or seven weeks. We do it like this. I've said it here, I've said it to the boys already, we can change as much as we want when we win the games, but when we don't win the games I take the blame. I have no problem with that. The boys who came in were fresh and did a brilliant job; they played, they worked hard. We worked hard, it was a derby, we accepted it, we took it as a derby, it's a fight.

“You need to be ready for each challenge – and we were ready for each challenge. We tried everything. We could have scored, we had clear chances, half-chances – we had everything you need but we didn't use it, that's how it is and we know that. It was always clear a day like this could happen – we wanted to win 1-0 and we didn't. I was really happy with the performance of the team, that's how it is. They played well.

“Can they play better? Yes. But it's an intense time. Ask everybody who played during the week, it's intense what we're doing, so that's why we made changes. We thought we needed fresh legs – that's what we had and we could have won it. We didn't, so – as I said – blame me.”

Allardyce, meanwhile, noted that it was encouraging to see both Coutinho and Firmino on the bench. However, that did not in any way alter his approach to the clash – Everton were devoid of ambition regardless and were rightly grateful to have received a point in a derby they were a distant second best in.