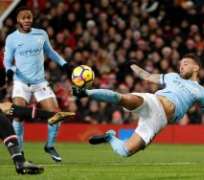 T hose noisy neighbours were at it again. Too noisy, apparently, for Jose Mourinho who asked Manchester City to turn down the tunes as they celebrated in the away dressing room after a victory which extended their Premier League lead to a seemingly insurmountable 11 points.

Mourinho had liquids thrown at him, it appears, and went on to cry over spilt milk – lashing out at how “lucky” City were. But after the rinsing his team had taken out on the pitch, it did not wash.

It is mid-December, the snow is falling and, with it, all City's rivals have surely drifted away with second-placed Manchester United the last to drop as they lost the 175th Manchester derby and were schooled, at times, by Pep Guardiola's team.

City are also 14 points in front of champions Chelsea and 16 ahead of fourth-placed Liverpool. Their 46 points would have secured them a top-eight finish last season. And that is over 38 games, not 16. It will take some collapse to blow it.

What will hurt more for United and their supporters is that – the brilliant David Silva apart – City were not even at their best to win this encounter and gain a 14th successive league victory, a Premier League record. This was also their fourth league game in a row won 2-1.

In doing so they ended United's proud record of 40 home matches without defeat – they needed one more to go ahead of Sir Matt Busby's United in 1966 – a sequence that started in September last year. After City won here, how that will hurt.

A fterwards it was peak Mourinho with the United manager declaring we can all bring out “stats” and “football theory” and how the game apparently hinged on a penalty appeal that was turned away when Ander Herrera went down under Nicolas Otamendi's challenge.

Given Mourinho's pre-match warning that City were a team of divers, how ironic it was that Herrera was the only player booked for simulation. Mourinho even said he felt “sorry” for referee Michael Oliver, but enough Jose, enough. United were well beaten and he was bested – once more – by Guardiola.

The City manager's response? “We were better,” he said. And they were; all over the pitch. There was even another irony in that having been so fretful over United's threat from set-pieces, City should score both their goals by that means. Plus there were two horrible interventions by Romelu Lukaku, with the United striker providing inadvertent 'assists' to City before he had even touched the ball inside the opposition area.

W hen he did, late on, he forced an incredible save from Ederson as he drove a powerful close-range shot that struck the goalkeeper in the throat. Even then the Brazilian reacted quickly enough to turn away the follow-up from substitute Juan Mata. It was a double-save of David de Gea dimensions.

If United had claimed a point it would have felt like a victory given how they were dominated and out-played in the first half. Without the suspended Paul Pogba, Mourinho had set them up with four attacking players – Lukaku, Anthony Martial, Marcus Rashford, Jesse Lingard – but only with the intention of trying to spring quickly on the counter-attack. It did not work as his team were under constant pressure, hurried into playing the ball long and spending most of their time trying to track the deceptive movement of City's inter-changeable front three of Jesus, Raheem Sterling and Leroy Sane.

“Park the bus, park the bus, Man United,” sang the gleeful City fans, as their team played deep in United's half, and there were murmurs of discontent from the home supporters, desperate for their team to do more. There was even a brief ripple of “attack, attack, attack” but it was City who did that when Silva floated the ball from the left to Sane who cushioned it on his thigh and fired a rising shot that De Gea did well to tip over.

B ut the danger was not gone. From the corner, Nicolas Otamendi rose alongside Lukaku with the ball rebounding off the Belgian's chest and dropping to Silva who quickly hooked it past De Gea and into the net from close range. City were in front. It was almost half-time but, finally, it did trigger a United reaction with Marcos Rojo crossing deep from the left and Otamendi mis-timing his attempt to clear, as the ball went over his head. Maybe it distracted Fabian Delph behind him because the stand-in left-back allowed the ball to skim off his chest and run to Rashford who coolly steered a low shot back across Ederson, who had strayed too far to his left, and inside the far post.

S urely that would change the dynamic? City had dominated but were not in front. United had struggled but were level and they did briefly appear more ambitious in the second half until Herrera needlessly gave away a free-kick. Silva took it but it ran through to Lukaku, who had time and space to clear, but he hurriedly half-volleyed the ball, smacking Chris Smalling in the back, and it rebounded to Otamendi who smashed it past De Gea.

It knocked the stuffing – what was left – out of United and even the arrival of Zlatan Ibrahimovic did not boost them with Guardiola cleverly bringing on Eliaquim Mangala and using Silva as a 'false nine'. Kevin De Bruyne went close, forcing a fine, low save from De Gea, before Ederson saved from Rashford and then excelled with his double-stop. (The telegraph, UK)