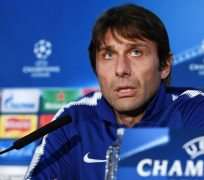 Antonio Conte was in bullish mood before Chelsea's final Champions League group fixture, telling opponents Atlético Madrid: “You may be in good form, but so are we.”

Atlético have reached the Champions League final twice in the past three seasons and are unbeaten domestically, but even victory might not be enough to see them qualify for this year's knockout stages. Chelsea beat Atlético 2-1 at the Wanda Metropolitano in September and Conte warned his rival that “playing the Europa League can happen”.

“I think Madrid is always a strong team and now I think they are in a good moment of form but is the same for us for sure,” Conte said. “The game will be open because Atlético Madrid will try to win, but it will be the same for us. The only difference is that the final result for them is too important. We are already qualified.”

Antoine Griezmann has returned to form, scoring four goals in the past three matches. Next month he will be joined in attack by Diego Costa, who left Chelsea in acrimonious circumstances last summer and did not travel with the Atlético squad for this match. But Conte rejected the suggestion any player was more important than another.

“I think we must have great respect for Atlético Madrid, the whole team, they are one of the best teams in Spain”, he said. “Three games ago there was a problem with Griezmann, because he didn't score. Now he is scoring but Griezmann is a top player. He plays in a great team. If, after tomorrow's game, they have to play in the Europa League, it can happen. But we must have great respect for the whole team, first of all for his coach.”

Another player who has felt the wrath of Conte was David Luiz and he will not feature in the match after sitting out training. Conte insisted this was down solely to a knee injury suffered by the Brazilian. When asked if there was any enduring problem between the pair, Conte was brusque. “That was two weeks ago, that was the past.” There may soon be a resolution to one off-the-pitch issue for Chelsea, the identity of the club's next technical director.

Michael Emenalo, who had occupied the position for a decade, left Stamford Bridge last month and reports suggest the role may now be offered to Leonid Slutsky, who was relieved of his duties as Hull City manager on Sunday.

Slutsky has a long-standing relationship with his fellow Russian Roman Abramovich and the pair are expected to meet this week to discuss opportunities, though the 46-year-old replacing Emenalo is not guaranteed. Slutsky himself is believed to be considering taking a break from football, while Chelsea may yet split the role between more than one candidate.

Emenalo, meanwhile, has spoken about his time at Chelsea and asserted his admiration for Conte. A dispute between the pair over last summer's transfer activity was believed to have contributed to the 52-year-old's departure in November but both men have spoken warmly of each other since.

Claiming Conte was one of “the best three coaches in the world”, Emenalo, who is now technical director of Monaco, insisted Conte enjoyed the full support of Abramovich. “He enjoys a lot of respect at the senior level, the board level and the ownership level of the club,” he told TalkSport, “so there should be no worries at all.”