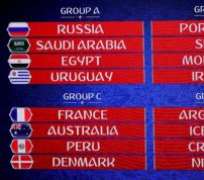 Nigeria on Friday in Moscow drew Argentina for the fifth time in six appearances of the Super Eagles at the FIFA World Cup finals.

The Super Eagles were drawn alongside Argentina, Iceland and Croatia in Group D.

The State Kremlin Palace is the Parliament of the Russian Federation, which served the same purpose when the country was a much bigger, more intimidating Union of Soviet Socialist Republics (USSR).

Gary Lineker, who played in the 1986 and 1990 finals for England and scored in both competitions, conducted the Draw alongside Russian star Maria Komandnaya.

Others were Carles Puyol (involved in Spain's 2010 triumph in South Africa) and Nikita Simonyan (who played for 2018 hosts Russia in the 1958 finals in Sweden).