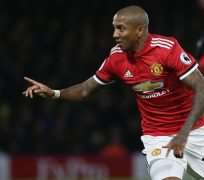 Four brilliant goals, a slightly make-do defence and a thrillingly open away victory: no wonder José Mourinho could be seen looking briefly confused on the Manchester United bench as Ashley Young's sublime first-half free kick flew into the top corner.

Mourinho's team were deserved winners at Vicarage Road on a night when they might, Mourinho suggested, have had seven or eight. Poetic licence perhaps but then the idea this United team are built to strangle the life out of their opponents has always been a little awry given the depth of attacking talent, and the brilliance of Paul Pogba when he plays as he did here.

United had looked like running away from Watford as Ashley Young enjoyed an early festive return to Vicarage Road, scoring two lovely goals. The home team never gave up though, dragging it back to 3-2 before Jesse Lingard took the game away with a sublime late fourth goal, weaving his way from his own half to finish in front of a delirious away end.

This match had been billed as a meeting of young, hopeful Portuguese tyro and old, toxic Portuguese grandmaster. In the event it was a messy, fun affair in front of a boisterous crowd. Vicarage Road has been steadily wrestled into gleaming Premier League shape, with the new stand looming along one side, the groovy looking fishbowl-style boxes in each corner and that close, crackly atmosphere you only get in an urban ground packed in between houses.

United have a tricky run ahead and this felt like a vital game from the start such is the pressure of Manchester City's white heat at the top of the table and the clinch already for the remaining Champions League spots.

Mourinho gave Marcus Rashford a rest after four games in 14 days. United also made the expected shift to three at the back, a common ploy against opponents who tend to set up that way.

There may have been more illustrious backlines in United's history than a depleted Rojo-Smalling-Lindelof and Watford set out to press high early on. At times Richarlison likes to man-mark one of the centre-halves and he ran at Victor Lindelof early on, all eager, bounding menace.

Richarlison narrowly failed to get a toe on Kiko Femenía's low cross from the right as Watford started with energy and enterprise. Abdoulaye Doucouré and Will Hughes had an early grip of midfield. Marvin Zeegelaar, wearing his special I've-met-Andy Carroll white face mask, was a threat on the right.

At which point United killed the game. It was brutal, high-class, and helped by some surprisingly scruffy defending. The first goal arrived after 19 minutes via a brilliant piece of opportunism from Young. Lingard made a nice run through the centre-forward position. The ball broke to Femenía, who failed to control it. Young swung his right foot, connected sweetly and pinged a low, hard, daisy-cutter past Heurelho Gomes into the corner.

It was Young's first goal away from Old Trafford since March 2015. Six minutes later he had his second. Pogba set off on a driving run through the heart of the midfield. Doucouré dragged him back. And from 25 yards Young sidled up and curled a wonderful free-kick into the top corner, a perfect execution from a player who scored a few of those for Watford a decade ago.

Young was recently offered a new contract that could keep him at United until the age of 34. Not a bad Indian summer for a player who was famously rejected by the Watford academy for being too small.

On 32 minutes it was 3-0. This time it was Christian Kabasele who failed to clear. The ball fell to Lingard. He nudged an instant pass to Anthony Martial, who ran on and finished expertly.

The away end gurgled with delight, Watford's heads dropped and for a while Pogba seemed to have complete control of midfield, always ready to find the right pass.

Lingard should have scored but saw Gomes make a brilliant, sprawling save. Richarlison hit the top of the bar with a header but at half-time Watford trooped off looking utterly drained, picked off by United's razor edge.

The home side threw themselves gamely into the second half, although they might have been picked off on the break, too, as Pogba continued to link the play with real elan. Nemanja Matic limped off, as did a disconsolate Hughes, followed by Martial, rested for the trip to Arsenal on Saturday. Romelu Lukaku really should have scored, delaying too long in front of a near-open goal.

But with 77 minutes gone Watford had a penalty as Marcos Rojo hacked down Roberto Pereyra. Troy Deeney tucked it into the corner. As Vicarage Road roared Doucouré pulled another back with a neat low shot before Lingard's grandstand finish.