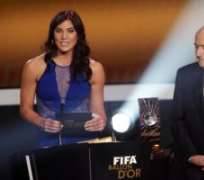 Disgraced former FIFA president Sepp Blatter has denied Hope Solo's allegations of sexual assault , calling them “ridiculous” and saying, “you have to look at this lady's CV.”

Earlier this month, Solo said Blatter  “grabbed my ass” at the Ballon d'Or awards ceremony in 2013. Blatter, at the time, denied the allegations through a spokesperson, calling them “ridiculous.”

Speaking to French radio station RMC on Tuesday, he reiterated that sentiment:

“The accusation of Hope Solo is ridiculous,” he reportedly said (in French). “You have to look at this lady's [résumé]. I am not guilty.”

According to another transcription  of the interview, Blatter said, “Look at this woman's [résumé] and you'll see that it's ridiculous what she's doing. I refute the facts.”

Solo said the incident occurred backstage at the ceremony, right before Solo presented the FIFA Women's Player of the Year award to teammate Abby Wambach. “I was in shock and completely thrown off,” she told the Guardian .

Blatter's mention of Solo's résumé is likely a reference to the American goalkeeper's disciplinary record. She was arrested in 2014 and charged with domestic violence . Those charges were eventually dismissed , but the decision to dismiss them was overturned by a higher court.

Solo has also been suspended twice by U.S. Soccer. In 2015, during a U.S. national team training camp, Solo's husband, Jerramy Stevens, was reportedly pulled over at 2 a.m. and charged with DUI. Solo was in the vehicle with Stevens, and was suspended 30 days for the “ incident .” She was then suspended for six months and had her contract terminated  after calling Sweden , the U.S.' opponent in an Olympic quarterfinal loss , “cowards.”

But none of this has much, if anything, to do with the allegations against Blatter. And Blatter doesn't exactly have the cleanest résumé himself. He oversaw widespread corruption within FIFA during his 17 years as president. He resigned in 2015 amid controversy and, specifically, a massive scandal and wide-ranging investigation that is still ongoing.

Blatter is currently banned from all FIFA activities for six years, but also said on the French radio station that he had been invited to the 2018 World Cup by Russian President Vladimir Putin. He said he had accepted the invitation, and will be in Russia next summer.

Henry Bushnell  covers soccer – the U.S. national teams, the Premier League, and much, much more – for  FC Yahoo  and  Yahoo Sports . Have a tip? Question? Comment? Email him at  [email protected]  or follow him on Twitter  @HenryBushnell .