Why Mourinho should drop Romelu Lukaku to the bench now: Martin Keown 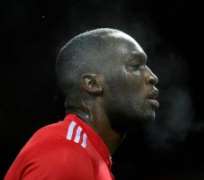 Martin Keown has urged Jose Mourinho to drop 'pussycat' Romelu Lukaku so the Manchester United summer signing can return to the side with 'some fight and determination'.

United signed Lukaku for an initial £75million over the summer and the former Everton talisman enjoyed a sensational start to his career at Old Trafford, scoring 11 goals in his first ten games for the club.

But the 24-year-old has only scored once since September and looked 'lost' in Saturday's 1-0 win over Premier League new boys Brighton, according to Keown.

'If Jose Mourinho wants to get Romelu Lukaku firing again, he needs his £75million striker to reach boiling point,' the former Arsenal and England defender told the Daily Mail .

'I am not talking about a petulant reaction to a penalty-box wrestle with an opponent, but rather his performance.

'It might be the right moment to leave him out against Watford on Tuesday. Lukaku has scored a single goal in his last 10 games in all competitions.

'Give him some space so that he comes back an angry man, with some fight and determination.'

Keown added: 'I have described Lukaku as a pussycat, whereas Manchester United want a lion on display (and we all know which animal Zlatan Ibrahimovic likes to compare himself to).

Martin Keown believes Lukaku would benefit from dropping out of the starting XI (Picture: Getty)

'It is about how you get Lukaku to that stage. He was bought to lead the line and score the goals to win the title. That isn't happening.'

Lukaku will hope to rediscover his goalscoring touch when United travel to Vicarage Road to face Watford on Tuesday evening.