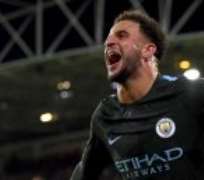 Only a third of the way into its Premier League campaign, Manchester City is already making history.

After Huddersfield took a shock lead, Raheem Sterling won a penalty — which Sergio Aguero converted to draw the teams level — before completing the comeback himself six minutes from time to restore an eight-point lead for City at the top of the table.

After handing Manchester United its first league defeat of the season in October, Huddersfield had another famous victory in its sights when Christopher Schindler’s header deflected in via City’s Nicolas Otamendi in added time at the end of the first half.

However, City leveled just two minutes after the break when Aguero calmly converted his spot kick after Sterling was brought down by Scott Malone.

There was some fortune attached to the winning goal. Substitute Gabriel Jesus had his shot saved, but it popped up into Sterling’s midriff and looped into the top corner.

STERLING ON THE UP
It wasn’t Sterling’s first late winner of the seaso n for City. The England winger scored deep into stoppage time at Bournemouth in August to secure a 2-1 victory.

Sterling has previously faced criticism for failing to add end product to his prodigious dribbling skills and pace, but he has been prolific in front of goal so far this campaign. His goal at Huddersfield was his 12th in 18 appearances in all competitions.

“He (Sterling) is still young, he’s able to improve,” Guardiola said. “We are going to be there to help him to become a better player. We are so satisfied with his performance.”

LATE AGAIN
When Arsenal went into added time still level with Burnley, history suggested victory was still within its grasp.

On its last trip to Turf Moor, in October 2016, Laurent Koscielny scored the only goal in the 93rd minute. In the corresponding fixture at the Emirates Stadium in January, Sanchez stepped up eight minutes into added time to give Arsenal a 2-1 win after Andre Gray had leveled with a penalty of his own five minutes earlier.

There was only one spot kick on this occasion, as Sanchez found the bottom corner two minutes into stoppage time after James Tarkowski was adjudged to have pushed Aaron Ramsey.

“There’s a lot of me inside, that’s raging a lot,” Burnley manager Sean Dyche said. “Football’s a harsh game and sometimes it hurts you.”

It was only the second away victory in the Premier League for Arsenal this season and came against a Burnley side on a three-match winning streak, in which it had not conceded. The win moves the Gunners back above Tottenham and into the top four, but it remains 12 points adrift of City.

EVERTON CRISIS
Having started the season considered the side most likely to challenge the Premier League’s “Big Six,” Everton is swiftly falling into a fight at the other end of the table.

Former Everton player David Unsworth has been in temporary charge since Ronald Koeman was fired on Oct. 23, but has managed just one win during his seven-game tenure. The club is still searching for a permanent replacement, with Unsworth’s failure to improve results likely having ruled him out.

“I wouldn’t go that far so early,” said Unsworth, when asked if Everton were embroiled in the relegation fight. “I think we are in a tough moment, I think we have a massive week ahead of us. If you ask me that question next week I can give you a more honest view.