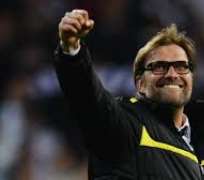 Jurgen Klopp has provided a fitness update on Joel Matip, Emre Can and Adam Lallana ahead of Liverpool's clash Chelsea on Saturday evening.

The Reds welcome the Premier League champions to Anfield as they look to respond to Tuesday night's embarrassing 3-3 draw with Sevilla.

After going three goals ahead in Spain, Klopp's side conceded three in the second half, setting up a crucial final group game against Spartak Moscow.

Before then, however, Liverpool will need to keep their league form on track, with Saturday providing an opportunity to make it four wins in a row.

Klopp could be without Can, though midweek absentees Matip and Lallana will be considered for selection after training with the squad on Thursday evening.

Lallana is yet to play this campaign after picking up a thigh injury during pre-season, but may come in for his first appearance against the Blues.

“Adam is on his way, no doubt about that. We have to see how we handle this,” Klopp told reporters at Melwood.

“Joel trained yesterday [for the] first time with the team, again we have to see as well. Both good signs, but nothing else to say.

“Emre struggles a little bit, a little strain in the game. Could be close, he's a doubt.”

Can is, therefore, likely to start on the substitutes' bench on Saturday, and should be joined by Lallana, who is yet to be named in the matchday squad since returning this month.

If all three are passed fit, Klopp's only injury problem will be Nathaniel Clyne , whose back problems are set to keep him out until February.

Though their draw with Sevilla was a setback, Liverpool are still in strong form, having gone five games unbeaten since their 4-1 humbling away to Tottenham last month.

And Klopp's improving options are hugely encouraging, providing the German with the opportunity to rotate his selection between games.

Without Can, he is likely to keep faith with the trio of Jordan Henderson , Georginio Wijnaldum and Philippe Coutinho in midfield, though it could be argued James Milner deserves to start.

Henderson was in woeful form at the Ramon Sanchez Pizjuan, but his presence as captain should keep him in the side, for better or worse.

Matip could come straight back in to replace Ragnar Klavan at centre-back, though it was their partnership that saw just one goal conceded in three games earlier in November.