Champions League: Real Madrid through to next phase, Liverpool stumble 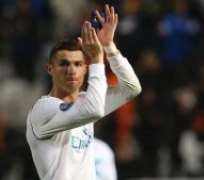 Holders Real Madrid have secured their place in the knockout phase of the Champions League with an emphatic win and a draw was enough for Besiktas but Liverpool were pegged back in their bid for the last 16.

Real claimed their biggest away victory in the competition with a 6-0 thumping at APOEL Nicosia to guarantee second place in Group H, behind Tottenham Hotspur.

Spurs won 2-1 at Borussia Dortmund with Harry Kane scoring his 39th goal in 38 competitive club appearances in 2017 to ensure they will top the group and end the German club’s progression hopes.

Group E remains alive with the Reds on nine points, Sevilla eight and Spartak Moscow, who drew 1-1 with eliminated Maribor, on six.

Besiktas became the first Turkish side to win a Champions League group, 1-1 at home to Porto.

RB Leipzig kept their chance of progress from Group G alive by cruising 4-1 at Monaco.

Real had few problems in Cyprus after Luka Modric’s brilliant volley broke the deadlock in the 23rd minute.

Karim Benzema struck a first-half double either side of Nacho’s goal before Cristiano Ronaldo scored twice early in the second period.

“We played a great game, and used our heads.”

Dortmund recalled Pierre-Emerick Aubameyang after an internal suspension and the Gabon forward ended a 500-minute goal drought to open the scoring against Spurs.

But Kane levelled early in the second half and Son Heung Min netted the winner 14 minutes from time to secure the group. Spurs cannot be caught by Real as they hold the head-to-head advantage.

Roberto Firmino and Sadio Made scored from corners and the Brazilian added another to put Liverpool three clear 31 minutes into their match at Sevilla.

The hosts pulled one back in the second half through Wissam Ben Yedder and he netted a penalty after being fouled by Alberto Moreno to make things tense.

Guido Pizarro completed the astonishing comeback in added time and Sevilla can now only miss out if they slip up at Maribor next time and Spartak win at Liverpool.

“They fought back and well done to them.
“It feel like we lost but we didn’t lose. There is a game to go and it’s still in our hands but at the moment it feels really bad.”

Maribor are out despite Jasmin Mesanovic cancelling out Ze Luis’ opener in injury-time in Moscow.

Besiktas moved into the last 16 as Anderson Talisca equalised for visiting Porto in Istanbul in the opening period.

“We’re through to the round of 16 for the first time [in the modern era] and for that Besiktas deserve congratulations,” Pepe said.

Porto are second on head-to-head, level on seven points with RB Leipzig.

An own goal from Jemersen, a double from Timo Werner – once from the spot – and Naby Keita settled the tie before half-time.

Only Radamel Falcao, who had conceded the penalty with a foul on Willi Orban, gave eliminated Monaco brief hope.

Shakhtar would have progressed with a draw in Naples but Lorenzo Insigne, Piotr Zielinski and Dries Mertens struck for the hosts.